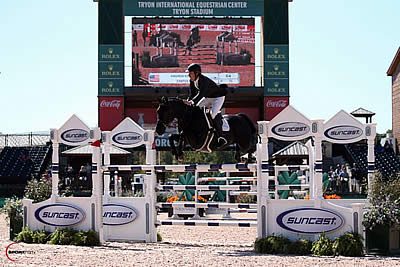 Mill Spring, NC – October 13, 2016 – Andy Kocher (USA) and Zantos II made easy work of the track in the $35,000 1.50m Suncast® Welcome CSI 3*, which hosted an impressive 60 entries, to take the win at Tryon International Equestrian Center (TIEC). The pair stopped the jump-off timers in 38.458 seconds ahead of Laura Kraut (USA) and Confu, who collected second place with a time of 40.001 seconds. Adam Prudent (FRA) and Victorio 5 earned third place after finishing the course in 42.349 seconds.

Kocher and Zantos II, owned by MKO Equestrian LLC, were trailblazers around the course set by Michel Vaillancourt (CAN) and were the first pair to secure a fault-free effort in the first round. The duo would later be joined by five combinations who also contested the demanding short course.

“I was really excited with this win. It was a tough class and when I walked I thought it would be one of those classes that would kind of show you where you were at, but it was a solid 1.50m,” said Kocher. “It was not soft in the slightest and was definitely built to the book.”

Kocher has added an element of consistency to his riding, which has been highlighted by several top finishes at major competitions in the United States and Canada this season. The class featured riders from around the world and included numerous Olympians, but Kocher took the pressure in stride, something he noted has improved since last season.

“Last year I would have been like frozen pizza out there with all of those guys. I had a great fall circuit here last year and we competed against some great riders too, but I just feel like now we’re a level up,” he explained. “I walked into the class today feeling like I had a chance to do really well and we did.”

Zantos II, a 2004 Dutch Warmblood gelding (Solitair x Mermus R), is a firecracker of a ride, whose determination and heart outsize his deceivingly petite frame. With Kocher piloting from the irons, the pair has collected top finishes at the American Gold Cup in North Salem, NY, Great Lakes Equestrian Festival in Traverse City, MI, and at Angelstone Tournaments in Rockwood, ON since the gelding was imported from England earlier this season.

“He’s really small. It almost feels like you’re riding a small pony but he is so brave. He thinks he’s 18 hands and is just incredibly careful. He isn’t a horse that naturally jumps 1.50m, but if you set him up right he will always be successful,” he explained.

The pair will now turn their focus to producing a strong finish in the $130,000 Suncast® Grand Prix CSI 3* on Saturday, October 15, before heading to contest the indoor season.

“This class was awesome and I got just about everything out of him. I love competing here and it was a great feeling to come out on top against such a strong field,” added Kocher.