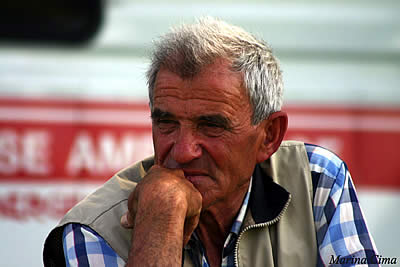 Lausanne (SUI), 14 October 2016 – Albino Garbari, Cross Country course designer at hundreds of major Eventing competitions, including the Athens 2004 Olympic Games and the 1998 FEI World Equestrian Games™, has passed away. He was 82.

A hugely popular figure in the Italian Eventing community, Albino Garbari moved to Rome in 1960 and dedicated his life to equestrian sports.

He was first head of the Federal Equestrian Centre of Pratoni del Vivaro, which was created for the 1960 Olympic Games in Rome. He then started course designing in 1965, and was the Cross Country course designer for every major event organised in Italy, including the FEI European Eventing Championships in 1995 and the 1998 FEI World Equestrian Games™, both of which were held at Pratoni del Vivaro. He also worked as an FEI Steward for Eventing and Dressage throughout his career.

Amongst the many awards he received in recognition of his services to equestrian sport was the Knight of the Order of Merit of the Italian Republic in 2007.

Alessandro Fiorani, Head of Eventing at the Federazione Italiana Sport Equestri (FISE), said: “Those of my generation have grown up with the Albino teachings. I was a child and I saw his work, and then in my time at FISE I have had the opportunity to see the great qualities of this man who taught me everything. He conveyed the fundamental teachings of everything connected to the management of the horse and the team, and we have been able to pass on this incredible knowledge. Even when he retired, Albino Garbari continued to give advice and support whenever needed, and he never failed to do this. We will miss him.”

Catrin Norinder, FEI Eventing and Olympic Director, said: “Albino was a brilliant course designer and such a big character. He will be missed immensely by everyone in the Eventing community. He dedicated his life to equestrian sport and leaves a huge legacy.”

“Albino was a very special person and an amazing figurehead in the Italian Eventing community. He has been my mentor in course designing and will be greatly missed by all,” said Giuseppe della Chiesa, Chair of the FEI Eventing Committee and international course designer.

The funeral of Albino Garbari will take place Friday at 14.00 in Rocca di Papa.

The FEI extends its sincere condolences to Albino Garbari’s family and friends, to the Italian Equestrian Federation and the global equestrian community.