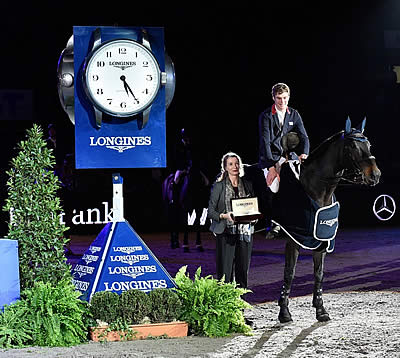 Stuttgart (GER), 23 November 2014 – William Whitaker stepped right into the limelight with a brilliant win with Fandango at the fifth leg of the Longines FEI World Cup™ Jumping 2014/2015 Western European League series in Stuttgart, Germany today. The 25-year-old nephew of British legends, John and Michael Whitaker, out-classed many of the best in the world in a thrilling 10-horse jump-off in which he set an impossible target-time when second to go.

It was a career-defining moment for the young Englishman who lives at the Yorkshire farm where his father, Ian, grew up alongside two of the greatest names in the modern sport. And Uncle Michael played a role in today’s latest Whitaker success-story. He missed out on a place in the jump-off himself, due to a single first-round error with Viking, but he watched Davis set the pace against the clock and advised his nephew that “she was fast, so put your foot to the floor from the start!”

Course designer, Belgium’s Luc Musette, has a style all his own and set them a first-round test that proved pretty challenging.

“When we walked the course we all thought the last line was the most difficult, but it turned out it was easier than a lot of the rest of it!” said Guerdat afterwards. The two most troublesome spots were the double, oxer to vertical, at fence six and the triple combination at nine which was approached off a right-bending line following the previous oxer. Talking about the latter, Olympic champion Guerdat explained, “The problem was not the distance from the fence before; it was that there was water under the oxer at the B element and there were just three poles at the opening vertical so the horses could see the water through them, and a lot of them backed off. Also it was a one-stride to one-stride combination, so that always makes it more difficult,” he pointed out.

Davis, however, made it all look very elementary indeed with a fabulous first-to-go clear with her chestnut gelding, and Whitaker followed suit when tenth into the ring. The surprises of the day included retirements for both newly-crowned world champions Jeroen Dubbeldam and Zenith from The Netherlands after falling victim, like so many others, to the double at six and the triple combination, and for world team and individual silver medallist Patrice Delaveau from France who called it a day after Lacrimoso HDC lost his balance on take-off at the penultimate double and demolished the first element before grinding to a halt at the second element.

Davis led the way against the clock, and again the 22-year-old who was a member of the bronze-medal-winning American team at the Alltech FEI World Equestrian Games™ 2014 in Normandy, demonstrated her consummate professionalism with another brilliant run that stopped the clock on 49.84 seconds.

Whitaker was next. “I didn’t see Lucy go, but Michael said she was quick. I had my plan already made for what I had to do anyway, and my horse tried his best – I knew I was going fast!” the British rider said after breaking the beam in a staggering 47.27 seconds that proved just way too good, even for Guerdat whose reputation for sometimes scary acrobatics with his super-speedy horse makes him one of the most feared competitors on the circuit. And it wasn’t like the reigning Olympic champion wasn’t giving it everything he had when second-last into the ring.

“I wanted to win because I’ve finished second here at Stuttgart three times so it would mean a lot! But the jump-off didn’t suit my horse – I had to add a stride between the second and third fences, and again coming down to the last fence so I lost time there,” Guerdat explained. Three-time FEI World Cup™ Jumping champion, Germany’s Marcus Ehning, slotted into fourth with Cornado NRW ahead of Australia’s Edwina Tops-Alexander and Fair Light van’t Heike in fifth while, last to go, The Netherlands’ Gerco Schroder and Glocks Cognac Champblanc finished sixth.

Whitaker’s career has been on an upward trajectory for some time now following a series of great results with the mare Upperclass, but he might have expected to take a step back following her sale to Artisan Farms two months ago. However, the 11-year-old Fandango has stepped right into the breach.

“He’s been in really good form for the past few weeks, but this is his first season at World Cup level indoors and it’s a different experience for a horse. To win this class was pretty amazing!” the British rider said tonight.

Fandango’s fearless qualities paid dividends today, particularly at the bogey triple combination. “He’s not spooky at all, so the water-tray at the B element didn’t affect him. The course builder put it there to take the horse’s focus off the first element but my horse hardly noticed it. He’s always forward-going and I think he prefers bigger arenas, even outdoors. This is a good big arena here in Stuttgart so that suited him,” he explained.

Now Whitaker is planning the remainder of the Longines FEI World Cup™ Jumping season. “Fandango will have two weeks off, and I’ll do a couple of small shows with some other horses, then he will come back for Geneva (SUI) and Olympia (GBR). I’m really looking forward to competing at Olympia in front of the home crowd. I haven’t been there for a few years and it will be nice because there will be a lot of the family around as well.”

Next weekend the Western European League moves on to a new venue in Madrid, Spain with Steve Guerdat, winner of the second leg at Helsinki, Finland, holding a strong lead on the league table and already well-qualified for the series Final, which will take place in Las Vegas, USA from 15-19 April 2015.

The League has a total of nine qualifiers from which the top 18 riders are eligible for the Longines FEI World Cup™ Jumping 2014/2105 Final in Las Vegas, USA next April.

4 retirements, including Jeroen Dubbeldam and Zenith from The Netherlands, who took team and individual gold at the Alltech FEI World Equestrian Games™ 2014 in Normandy, France, and French rider Patrice Delaveau, who claimed team and individual silver in Caen.

10 horse-and-rider combinations qualified for today’s second-round jump-off against the clock.

Steve Guerdat SUI – “The course designer did a good job; this was a nice and fair track to ride.”

William Whitaker GBR – “Michael (Whitaker) has trained me a lot and he has helped me at shows over the last year and more.”