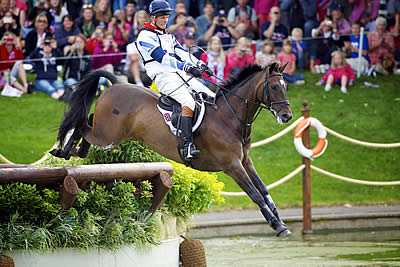 Lausanne (SUI), 1 May 2014 – William Fox-Pitt (GBR), multiple Olympic, World and European medallist, and the first British rider to lead the FEI World Eventing Rankings in 2002, is back as world number one.

Fox-Pitt, who also led the world rankings in 2009 and 2010, has a 16-point lead over Andrew Nicholson (NZL), who had led the world Eventing rankings since claiming team bronze at the London 2012 Olympic Games.

Fox-Pitt (44) represented Great Britain throughout his teenage years, winning individual silver at the Junior European Championships in 1987, Young Rider team gold at the European Championships in 1988 and 1989, and completed Badminton at the age of 20. His first Burghley win five years later established him as a regular on the senior British team and guaranteed him a ticket to the Atlanta 1996 Olympic Games.

He has gone on to represent Great Britain consistently over the past 15 years, winning team silver at the London 2012 and Athens 2004 Olympic Games, and team bronze at the Beijing 2008 Olympic Games.

Next weekend, with his highly successful horses Cool Mountain, Parklane Hawk and Chilli Morning, he heads to the Mitsubishi Motors Badminton Horse Trials (GBR), which is also the 4th leg of the FEI Classics™, a prestigious series uniting the world’s top six CCI4*s, which also he currently leads.

“It’s a fantastic feeling to be back as world number one,” said Fox-Pitt. “The world rankings are currently dominated by British riders, and it’ll be interesting to see if the British leaders of the world show jumping and dressage rankings, Scott Brash and Charlotte Dujardin, have retained their lead. This shows that our National Lottery funding and World Class Performance Programme is working, which is great news for all British athletes, and especially for equestrian athletes as we head into our world championships in Normandy his summer.”

The world Eventing championships will take place at the Alltech FEI World Equestrian Games™ 2014 in Normandy on 23 August – 7 September: www.normandy2014.com.