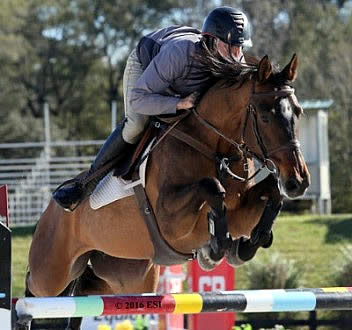 $2,500 Brook Ledge Welcome Stake
Andrew Kocher from Lake St. Louis, Missouri and Ciana, owned by Eagle Valley Partners LLC, slipped past Aaron Vale riding from Williston, Florida and Carlo, owned by Amatoville Enterprises, and Lisa Goldman of Hawthorn Woods, Illinois on Barbara Disko’s Sovereign to win the $2,500 Brook Ledge Welcome on Wednesday at HITS Post Time Farm in Ocala, Florida. In what is turning out to be a battle of the speedsters, these three riders have been duking it out for the top spot in the Open Jumper classes each week of the Ocala Winter Circuit – Kocher, Vale and Goldman were all in the top three last week’s $50,000 HITS Grand Prix.

Wednesday’s class featured a 1.40 meter course designed by Olaf Petersen Jr. of Muenster, Germany. Thirty-eight riders tackled the 13-effort course with 22 jumping clean to advance to the jump-off. Marilyn Little of Frederick, Maryland riding Venus, owned by Raylyn Farms, held the early lead with a clear jump-off round in 47.019.

When Vale stepped in to the ring on Carlo, you could tell he had a plan to take the lead. “These German course designers, both Petersen this week and [Martin] Otto last week, are really making galloping tracks and I saw that it would take someone to put the gas pedal down to win. I caught a really good turn back to the in and out and caught the last fence on an open stride.” Vale stopped the clock at 44.351 to take over the lead.

Next up was Goldman on the 9-year-old Sovereign. She picked up a gallop and sliced the turns, but added a stride in the last line to finish in 45.243, just behind Vale. Goldman was very pleased with her young horse: “He was fabulous! We are really starting to understand each other.”

No one underestimated the fact that Kocher was still to go on. With nothing to lose, he and the 9-year-old Dutch Warmblood Ciana laid it all on the line and despite a bit of a buck when landing off one fence, their time was a commanding 43.495, almost a full second faster than Vale.

“She’s just a very good game horse and I liked the course,” Kocher said. “I look forward to jumping her in the Grand Prix this weekend.”

$25,000 SmartPak Grand Prix
Lisa Goldman, of Hawthorn Woods, Illinois, and her veteran partner, Morocco, swept the competition in Thursday’s $25,000 SmartPak Grand Prix at HITS Ocala for the second week in a row. Devin Ryan, of Long Valley, New Jersey, riding his own Liratus, was second and Mathew Williams, of Wellington, Florida, riding Valinski S, owned by Michael Dorman and Wyndmont, Inc., was third. Andrew Kocher, of Lake St. Louis, Missouri, on Uppie De Lis, owned by BTS Entertainment and Sales, was the fastest with four faults for fourth and the top five rounded out with Hunter Holloway, of Topeka, Kansas, riding VDL Bravo S, owned by Hays Investment Corp.

Spectators are flocking to the Ocala Horse Properties Stadium during the Grand Prix days to watch the excitement unfold as all the top riders jump for the glory. One horse and rider have consistently thrilled the crowd as they speed around the course – Lisa Goldman and Morocco. They topped the class of 38 competitors with a double clear trip in 42.717 seconds. Olaf Petersen Jr., of Germany, designed the 1.50-meter course of 14 obstacles on a 530 meter track. Seven of 38 jumped first round clears, but only three jumped double clear.

First to contest the jump-off was Kocher on Uppie de Lys. The opening fence was a triple bar, followed by eight tight strides to a vertical at 9B, which toppled for four faults. Kocher kept up the pace with a really tight turn on the rollback to the second to the last, and a gallop home to the Platinum Performance oxer to stop the clock at 42.190, ultimately earning him fourth-place.

Next up was Williams and Valinski S, who opted for a careful clean in 47.146 to take over the lead. Ryan was up next on the big bay Liratus. The 11-year-old Danish Warmblood jumped in classic form, clocking in at 45.261 when Ryan sliced the second to the last, riding a really direct line to the final oxer to set a new Great American Time to Beat.

Taizo Sugitana and Chin Quidam VDL, owned by Hyperion Stud, LLC, were eliminated at 7A of the combination to take seventh place. David Beisel riding the big grey Call Me Hannes, owned by Harlow Investment Enterprises, LLC, had four faults at 7A to finish sixth in 45.846.

Next to go was Goldman and Morocco, and they did not disappoint as they galloped the course. They added a stride up in the opening line to accommodate Morocco’s stride which caused a few gasps as he swerved in front of the last jump, but still managed to jump clear in a time of 42.717 to take over the lead.

The final contestant was Holloway and VDL Bravo S, who also fell victim to 7A for four faults in 45.417 to finish fourth.

“This week’s course was smaller than last week’s, but much more technical; it suited my short-strided horse,” said Goldman. “The triple bar to the steady six to the vertical to vertical combination was really hard for the big horses but I barely had to pull on the reins. In the jump off Morocco tried to leave out a stride to the last jump and when I said you’re not leaving it out he thought we were going around it – I don’t know how he cleared that.”