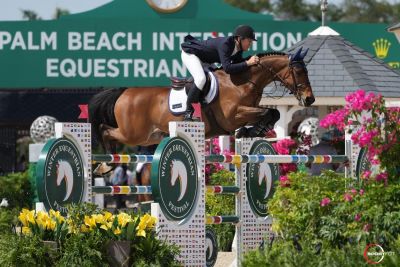 Wellington, FL – March 11, 2022 – A full day of elite international competition was slated for the International Arena on Friday, March 11, at the Winter Equestrian Festival (WEF). During WEF 9, presented by Douglas Elliman Real Estate, the $37,000 Bainbridge Companies 1.45m CSI5* saw an impressive 68 horse-and-rider combinations contending against the clock but none could best one of the fastest combinations in the world, Olympic team gold medalist McLain Ward (USA) and Catoki.

Sixteen nations were represented in the starting field of the single-round speed class designed by Alan Wade (IRL). Wade set a time of 72 seconds allowed, and most entries navigated the time easily. Wednesday’s five-star class winner, Darragh Kenny (IRL), looked set to add another victory to his name for the week, until Bertram Allen (IRL) and his own 10-year-old BE/SEIS mare Emmylou (Billy Mexico x Lupin Z) took to the course. Kenny’s previous leading time of 59.19 seconds with Oakland Ventures LLC’s 11-year-old KWPN mare Gouvernante VDL (Bacardi VDL x Stakkato) lasted until Allen shaved almost two whole seconds off the clock to jump ahead with a time of 57.69 seconds.

The victory looked in the bag for Allen, but nothing was certain with Ward and his speedy mount Catoki as the third from final entry to compete. Upon crossing the timers, the duo once again proved unsurpassable, taking the lead in 57.15 seconds. The duo duplicated their victory in the same class of the same week from the 2021 WEF.

Allen’s performance stuck in the second-place position, and fellow countryman Kenny rounded out the class’s final lap of honor.

The $6,000 Corro 1.45m CSI2* wrapped up international competition for the day. Just under 30 entries put forth their efforts over Wade’s single-round speed track. The class concluded with a win for the USA as Maria Costa piloted Iceman B SFN to the winning time of 63.40 seconds.

Only six of the opening field managed to come out of Wade’s test fault-free; a single rider had two time faults on the clock while an additional eight entries took down one obstacle. Costa put forward the best effort with her nine-year-old KWPN gelding (Mylord Carthago*hn x Corland) and bested the next closest contender by almost two seconds.

Bruno Passaro (ARG) produced the runner-up time with his second mount in the class, Alejandro Martin Del Campo’s 12-year-old Selle Francais gelding Splendide Kannan (Kannan x Quidam De Revel). As one of the six to finish without fault, they landed with a time of 65.70 seconds. Beth Underhill put Canada into the victory gallop as she and Casino Calvin galloped into third place. Underhill navigated the track in 66.61 seconds with the Rein Family LLC’s and Torrey Pines’s nine-year-old Oldenburg gelding Casino Calvin (Casino Berlin Old x Calvin) to round out the top three.