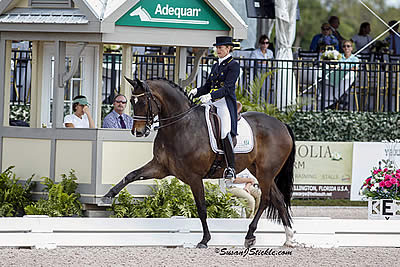 Wellington, FL – March 2, 2014 – The Adequan Global Dressage Festival (AGDF) Palm Beach Dressage Derby CDI W, presented by Martha W. Jolicoeur and Maria Mendelsohn of Illustrated Properties, concluded on Sunday at The Stadium at PBIEC. First to take a victory lap was Tinne Vilhelmson-Silfven (SWE) and Don Auriello in the FEI Grand Prix Special. The day concluded with the FEI Intermediaire Freestyle, which was topped by Evi Strasser (CAN) and Rigaudon Tyme.

Vilhelmson-Silfven and Don Auriello were hot off a win in Friday’s FEI Grand Prix before topping the Special with a 77.804%. Second place finisher Caroline Roffman (USA) earned a total score of 70.373% aboard her Highness O. Fellow American Lisa Wilcox and Denzello rounded out the top three with a 70.020%.

“I’m really happy with him. I actually had a personal best score today. I did have a little stumble in one of the half passes, I don’t really know what happened, but otherwise he felt good,” Vilehlmson-Silfven explained.

Don Auriello will now begin his trek back to Europe before the World Cup Finals, where Vilhelmson-Silfven admitted she will have a completely different horse.

“You’re in this heat, and then go indoors in Europe again. He’s totally different there. He gets hot. He gets totally excited. Here he’s a bit laid-back, and I have to get him awake,” she outlined. “So I have to switch from one to another, but on the other hand I almost like the hotness now, when he has the routine. In the beginning it was scary, but now I like it because I think he gets even more expressive. I hope that it will be the perfect combination.”

Roffman was proud of Her Highness O for doing so well in a test completely new to both of them. Sunday was the first time either of them had contested the Special, and while Roffman felt they had a few green errors, she will always be grateful for her horse’s fantastic attitude.

“She always tries, sometimes too much. I was also trying maybe too hard; maybe mistakes were silly on my part. She’s so honest, she just wants to do it for you. It’s a fun feeling to have a horse that’s always trying so hard, so I’m very happy with her,” Roffman explained.

The FEI World Cup Finals and WEG are goals for every rider, and Roffman noted that while she would be thrilled to qualify for either event, she’s happy to enjoy the journey with Her Highness O.

“We all dream of the same things, but it’s about going there and giving confidence. I don’t want to blow her mind. It’s not fair. She needs to take it easy and get confident, and me too, and then see what happens,” Roffman remarked.

Wilcox described herself and Denzello as having a combination of Roffman’s greenness and Vilhelmson-Silfven’s international aspirations. Sunday’s test was Denzello’s third CDI and only the second time he had done the Special, but with their promising results, Wilcox has her eye on the WEG.

“The mistakes he had, bless his heart, he’s thinking the Grand Prix lines for the twos. He was sure I was making a mistake. I was very, very pleased with his expression and what he offered me today,” Wilcox described.

Wilcox also had to deal with a horse just as hot as the tropical Floridian weather. She agreed that if you can harness that excess energy, it can pay off immensely. “I did want to up the expression a little bit, but he kind of did that on his own and I was more or less trying to calm him down in there. I know what Tinne’s talking about, it is kind of nice to have that power, but only if you can control it,” Wilcox pointed out.

The FEI Intermediaire Freestyle was seen later in the afternoon, with Canadian Evi Strasser besting the class with Rigaudon Tyme and a score of 72.208%. Second place went to Gabriela Stumpf (AUT) and Finally Love, who finished with a 68.125%. Amy Walker-Basak (USA) and Wagner were third with a 64.917%.

Strasser’s scores have steadily increased throughout the weekend before her win on Sunday. Strasser explained the trip to Wellington from Montreal, Canada, was a bit taxing on the horses, and she felt Rigaudon Tyme’s fitness was finally back up to par this weekend.

“This weekend, he was already way more on the ball. It took us quite a while to come here from Montreal to Florida, and I think it took the [horses] a full four weeks to recover. I think they’re just getting in shape, so I think next year we might have to come four weeks earlier!” Strasser smiled.

She continued, “Every day, it got a little better. I took this time over the last two shows to build him up and get him settled more. I could feel that I could ride more and not overwhelm him. With horses that are almost doing the grand prix, it’s always hard to ride a St. Georges because they are quicker than just an average St. Georges horse. They are way more alert.”

Strasser was also pleased to see that her tweaks to the choreography of her freestyle had paid off. The music was originally tailored to another one of her horses, and Rigaudon Tyme’s much larger gaits were causing the pair to either sacrifice quality or finish far ahead of the music.

“I had to put in two more pirouettes, and it worked out very well. Finally, I got it the way I want it and he really was amazing to ride and just very powerful, so it was a lot of fun doing it,” Strasser explained.

Strasser feels their music, which she arranged with the help of Karen Robinson, fits Rigaudon Tyme’s large frame perfectly.

Strasser has brought Rigaudon Tyme along since he was a three-year-old. Strasser usually buys prospects around that age before bringing them up through the ranks, an experience she describes as occasionally stressful, but incredibly rewarding.

Sunday marked the conclusion of the AGDF 8 Palm Beach Dressage Derby CDI W. Dressage competition will resume at The Stadium at PBIEC on March 8-9 for the AGDF 9 National. For full results and more information, please visit  www.globaldressagefestival.com.