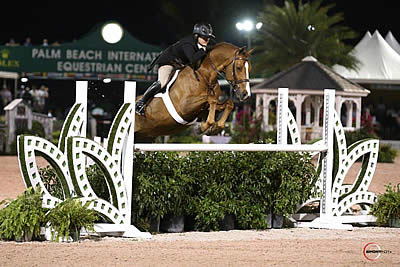 Amanda Steege of Bedminster, NJ and Lafitte De Muze held the early lead into the second course as the pair received a high score of 92.00 in the first course. Designer Ken Krome gave returning competitors plenty of options to show off their horses’ abilities with several long approaches to gain speed and a rare bounce-jump feature made of hay bales halfway through the second round handy test. Junior rider Jordan Allen of West Bloomfield, MI ascended to a top three finish on Kind of Blue, owned by Float On Equestrian LLC. As the second-to-last to return, 22-year-old Victoria Colvin of Loxahatchee, FL and Brad Wolf’s Private Practice performed a flawless round to win the event with judges’ scores of 93, 94, 91, and a final two-round total of 182.66.

Cournane and the 11-year-old Irish Sport Horse mare, owned by Mr. and Mrs. Robert Stiller, were one of seven entries to advance to the jump-off after navigating the first-round, Ana Catalina “Catsy” Cruz Harris (MEX) designed course without fault. Time proved to be a bit of a factor over the opening course, with four additional entries kept from the jump off by just one time fault apiece.

When Cournane returned to the grass field midway through the jump-off order, the time to beat had been set at 45.25 seconds by Liza Finsness (USA) and her own longtime mount, Shiver. Cournane and Penelope Cruz, however, swiftly took over the lead with a time of 44.89 seconds, and while three riders would follow Cournane, none would catch either he or Finsness, securing him the victory and Finsness the second-place honor. Finishing in third on a time 45.43 seconds were Mattias Tromp and Eyecatcher, owned by Beyaert Farm Inc.

Competition on Saturday once again saw junior and amateur hunter riders vying for a championship title amongst the steep competition at the show’s WCHR Hunter Week. Classes ran throughout the day leading up to the special “Saturday Night Lights” event, the $100,000 USHJA/WCHR Peter Wetherill Palm Beach Hunter Spectacular.

Leading off competition in the International Arena, Augusta Iwasaki and Small Occasion started the day by taking the champion title in the Palm Beach International Academy Large Junior Hunter 15 & Under 3’6“. Iwasaki also took the reserve champion title with her other mount Wheels Up, a 11-year-old Westphalian gelding (Lordanos x Lisboa) owned by Vantage Point Equine Corp.