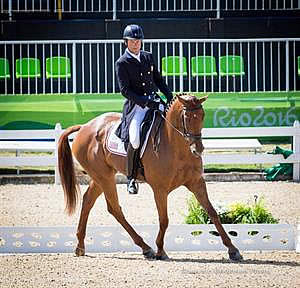 Rio de Janeiro, Brazil – After day one of eventing competition at the Olympic Equestrian Center at Deodoro, the U.S. Olympic Eventing Team sits in seventh place. Boyd Martin and Clark Montgomery put in solid performances among the 32 combinations that competed Saturday in day one of dressage before the ground jury of Marilyn Payne (USA), Andrew Bennie (NZL), and Sandy Phillips (GBR).

The trailblazer for the U.S. team was Martin (Cochranville, Pa.), riding the Blackfoot Mystery Syndicate LLC’s Blackfoot Mystery. Martin guided the gelding brilliantly in the electric atmosphere, scoring 47.70. Martin was proud of the gelding, stating, “He’s still a bit inexperienced and he did get a little bit excited with the cheering, but he kept his cool and did a good job. I was thrilled there were no big mistakes. I couldn’t have asked for much more.” Martin currently stands in 17th place individually.

First-time Olympian Montgomery (Bryan, Texas) was the second ride for the U.S. team, ending his dressage test with a score of 46.60 on Holly and William Becker, Kathryn Kraft, and Jessica Montgomery’s Loughan Glen. The pair has a long history of strong dressage performances; unfortunately, though Saturday’s test started out quite well, Montgomery was a bit disappointed.  “He started out really well and I don’t know what happened,” said Montgomery. “He really sucked behind my leg, where he constantly wanted to walk or stop, but I squeezed every point I could out of him. He was really good in the warm-up, but that’s the sport and that’s horses.”

Montgomery has turned his focus to Monday’s cross-country phase, saying, “He’s a very good cross-country horse. He’s quite reliable, so that’s what we’re all hoping on. That’s how we made the team. We thought coming here that clean cross-country rounds were going to be a big part of the competition and that has definitely turned out to be true with what the course looks like.” Montgomery stands in 10th place individually after day one of dressage.

Great Britain’s William Fox-Pitt stands as the current individual leader on a score of 37.0 on his horse Chilli Morning. Following right behind Fox-Pitt on a score of 37.60 is Christopher Burton with Santano II, riding for Australia. Michael Jung from Germany holds third place on Sam FBW with a 40.9.

Riding for the U.S. team on day two of dressage will be Lauren Kieffer on Team Rebecca LLC’s Veronica. Anchoring the U.S. team is six-time Olympian Phillip Dutton on HND Group’s Mighty Nice.