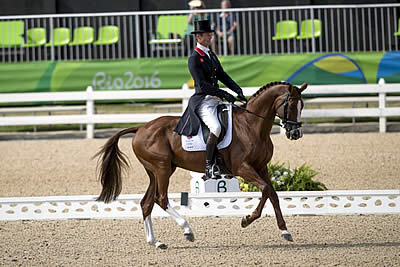 Rio de Janeiro (BRA), 6 August 2016 – It’s not everyone’s idea of the perfect rehab for a serious head injury, but Britain’s William Fox-Pitt defied all the odds to take the early lead as Olympic Eventing got underway at Deodoro Olympic Park in Rio de Janeiro (BRA).

Riding the 16-year-old stallion, Chilli Morning, the man, who spent two weeks in a coma after a fall while competing in France last October, threw down a great dressage score of 37.00.

“All along Rio has been my target, totally. It was unrealistic, but it was mine. I was in a coma for a couple of weeks and my sight was quite dodgy; I went from blind to seeing double so when I started jumping there were two jumps. It’s been a journey, but I’ve had so much support!” said the 47-year-old rider.

He was chasing the target of 37.60 set by Australia’s Christopher Burton and his regal nine-year-old gelding, Santano B, whose expressive performance was greeted by a roar of approval from the crowd. But when Fox-Pitt went out in front, the gentlemanly Brit was rewarded with another huge response from the spectators. His result, added to the 47.20 achieved by Gemma Tattersall with Quicklook V, leaves Team GB in third before the remaining 31 horse-and-rider combinations take their turn in the dressage phase Sunday.

Just behind Burton in the individual rankings is defending team and individual Olympic champion Michael Jung from Germany who scored 40.90, and with his compatriot Sandra Auffarth in fourth with Opgun Louvo the Germans head the team rankings followed by Australia in runner-up spot. There is plenty of pressure on the remaining team members Sunday, because just 1.4 points separate the two leading sides, with the British only 0.3 further behind.

A total of 33 horse-and-rider combinations stepped into the arena and it was Auffarth, ninth to go, who set the leading score at 41.60 before the lunch-break. Her test was not flawless, however – “I made a mistake and that made me make another one!” admitted the rider, who took team gold and individual bronze at the London 2012 Olympic Games.

Burton’s young Hannoverian drew gasps of delight from the crowd as he floated through extravagant extended trot to go out in front, but Fox-Pitt swept the 44-year-old Australian off the top of the leaderboard with a test the British rider said “is what dreams are made of!” And when the man they all fear most, the phenomenally consistent German Michael Jung, had a hiccup with his Badminton winner Sam, then the top of the first-day leaderboard wouldn’t change. “I made a stupid mistake in canter. It wasn’t because he was nervous; we just lost a little bit of communication,” Jung explained.

Fox-Pitt was his usual modest self. Talking about his ride with Chilli Morning, he said, “He’s good on the flat, capable of doing a very good test and I didn’t want to let him down. Today he felt happy and calm, but there are a lot of good horses to come and it will be what it will be,” he pointed out, looking forward to the next two phases.

Pierre Michelet’s cross-country track is a major talking point. Fox-Pitt described it as “a decent course, the biggest Olympic course I’ve walked, but Chilli is more than ready. I just hope I can do him justice.”

He continued, “It’s a true Michelet course, four corners and four skinnies, always committing you so that if you are not right on line then you will have a run-out, always encouraging you to attack it. The distances are all on the long side; it’s the most difficult Olympic Games I’ve seen but that’s how it should be. It will be a pretty good feeling if I go clear!”

He feels Chilli Morning will tackle it without difficulty, however. “There are no worrying fences out there for him, fence six (brush corners) is ugly, but the one I really don’t like is the corner to the gate (fences 23/23, The Malmesbury Cottage), there are just four strides to do it in, and with Chilli that’s a big question because he’s big and strong,” he added.

Fox-Pitt will have plenty of support when he heads out on cross-country day, because his story is one of tremendous success along with enormous courage, determination and resilience. And he just happens to be one of the most popular competitors in the sport. “It was great to have Rio to aim for,” he said. “The Games have come at the perfect time. I’m just ready in time; I’ve been very lucky with my rehab, and my physical and mental fitness is back on track.”

He has two team silver and one bronze Olympic medal already in his trophy cabinet, but an individual one has proved elusive during his spectacular career. He has given himself every chance of putting that to rights this time around, but there is another day of dressage to go before the individual and team leaderboards take shape ahead of what looks set to be a thrilling cross-country challenge on Monday and a nail-biting conclusion in the jumping arena on Tuesday.

William Fox-Pitt GBR: “Chilli is lean, he’s fit and well but he lost some weight on the journey here; he’s an older horse and it’s kind of his metabolism. I’ve never lost an event because I’ve been on a skinny horse! He felt good and very together; he can be a bit sprightly so I was pleased with how we went today.”

German Chef d’Equipe, Hans Melzer, talking about the decision to replace Andreas Ostholt and So is Et with Julia Krajewski and Samurai du Thot in his team: “Sport is tough. This was a tough decision which does not earn you a lot of friends but somebody has to take responsibility. Andreas was great in training; that is why we took him, but we can’t take the slightest risk regarding the horse’s health. I can relate to his feelings, but the decision stands.”

Mark Todd NZL, talking about his test with Leonidas ll: “I was hoping for better; he was a little bit distracted and got excited before we started; the trot was tense but it got better and he went well in canter. The cross-country track is very strong… you’ll know after (fence) six if you are in with a chance or not.”

FEI OLYMPIC HUB: For further information visit the FEI Olympic Hub which is dedicated to all things Olympic and Paralympic, both old and new: here.