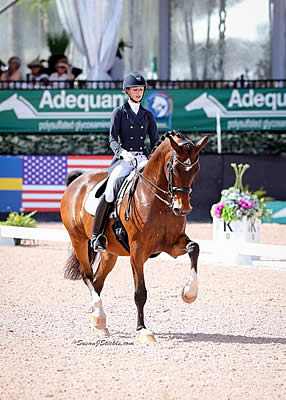 2016 Olympic bronze medalists Laura Graves (USA) and Verdades, a 2002 Dutch Warmblood gelding (Florett AS x Liwilarda) owned by Graves, ended the day with another win in the Global Arena and a score of 80.240%.

“It feels much more secure. It’s nice to know that what happened at the 5* wasn’t a one-hit-wonder,” Graves said of her second 80% score in the FEI Grand Prix. “It’s still pretty awesome. It’s a really, really exciting way for us to go in to the big things we have planned.”

Of her ride, Graves continued, “His ride-ability was really super. I was happy with my zig-zags. I feel like we covered a lot of ground in both directions. The pirouettes were really on; I was really happy with my final centerline. I think we ran out of a little steam. It was warm, and they were running a couple of minutes behind. He just doesn’t ever say ‘no,’ so he tried his best.”

Placing second and third to Graves in in the FEI Grand Prix CDI-W were 2016 Olympic teammates and bronze medalists, Steffen Peters (USA) and Kasey Perry-Glass (USA).

“I still had a little more energy than I wanted,” said Peters about his ride with Rosamunde, “but it was so much better than two weeks ago. I’m super happy with her. She did awesome trot half-passes, beautiful extensions, the piaffe and passage transitions were better. She is just so much fun to ride. She’s so beautiful in the bridle (and) always goes. Most of the time we have to say, ‘Hey wait, not that much!’ So it was a beautiful step ahead, and I thought that showing here in this arena a bunch of times would help her. Certainly, that worked out as planned.”

“Apparently, our tattoos have been working!” joked Peters of the Olympic Rings tattoos that the USA Olympic Dressage Team members recently got together. “It’s nice to be here with the two teammates.”

“I feel like it’s all still changing, and it’s going to change a lot because this is only his second year,” said Perry-Glass, of her progress with Dublet. “Two weeks ago, I felt like I was coming out and he was a little bit more amped to be in there. This week we finally found that relaxation in the ring, to where we can eventually add more power and consistency to it.”