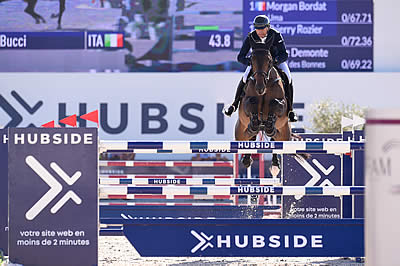 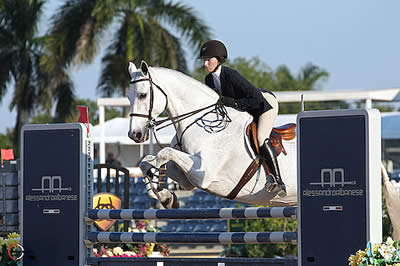 Other features include the $50,000 Artisan Farms Under 25 Grand Prix Final presented by The Dutta Corp. in association with Guido Klatte, as well as the $85,000 Suncast® 1.50m Championship Jumper Classic. Both classes will be held on the derby field at The Stadium at PBIEC on Sunday, March 22. They will be live streamed, beginning at 8 a.m. at http://bit.ly/1xjhKKK.

The 8th Annual George H. Morris Excellence in Equitation, presented by Alessandro Albanese, was held in three rounds with twenty-four riders competing in round one. The top 12 returned for round two, and the top four rode for additional testing in round three to determine the final placings. Course walk plans and schooling were the sole responsibility of the riders as competitors were allowed no contact with their trainers during the class, turned in their cell phones before the start of the class and were responsible for time management, warm up, and schooling of their own horses with the assistance of one groom.

The course was designed by Bobby Murphy of Lexington, Kentucky, in conjunction with the judges. The riders were judged by two panels, both chosen by Morris, and also received a score in the schooling area after the first and second rounds. Judging Panel 1 included Ralph Caristo and Chris Kappler; Panel 2 included Jimmy Torano and Anne Kursinski, with Eric Straus as the Schooling Ring Judge.

Fifteen-year-old Lucy Deslauriers handily led both rounds with scores of 90 and 93.75 in the irons of her mother Lisa Deslauriers’ Class Action. Joining her in the third-round test was Ali Tritschler, T. J. O’Mara, and Virginia Ingram.

Last year was Deslauriers’ first experience with the Excellence in Equitation event and admits both her and her horse stepped it up.

“Last year I did it more for the experience, and I was happy to have one year under my belt,” she said. “I felt confident going into this year, and my horse was a dream. I couldn’t have asked more out of him. He is really adjustable with a big stride, nice jump, and super sweet attitude in the barn. He’s really just amazing.”

The top three riders – Deslauriers, Tritschler, and O’Mara – agreed that the tracks were a true test of their ability to adjust.

“There were different options as far as the numbers go,” said Deslauriers. “In the original round, the striding in the second part of the first line and the line right after you could debate what numbers you chose. It took a lot of thought, and you had to do what was best for your horse.”

Watch Lucy Deslauriers and Class Action in their first round!

Tritschler, who approached the second round on a score of 85.75, took full advantage of the opportunities to showcase Walter Kees’ Helio Rouge’s talents. Coming off an innovative trot fence – triple bar – trot fence line, she executed a rollback on counter canter to the next fence and cued gasps from the sidelines.

“In the first round I wouldn’t have changed anything, but my scores were very different. I realized I had to keep one panel where they were, and I needed to change what mistakes the other panel saw,” she said. “One thing about my horse that’s amazing is the counter canter, and I knew I needed it to get in the top four. I really wanted to get to the top four, so I went for it.”

Torano spoke for his panel and said, “For a split second we almost thought she was going off course. But, she executed it beautifully and the horse stepped right up the line.”

The move did the trick and she left round two on a 91.5. “Last year was his first year and my first year on him, and it all took him by surprise – the ring, these lights,” added Tritschler. “This year he walked in and was unbelievable.”

After riding to eighth last year, T. J. O’Mara and the lone mare in the class – Kaskade, owned by Walstib Stables, LLC – made improvements for third this year. Aiming for consistency, O’Mara was pleased with each course. “Most of the lines walked pretty steady, but I really thought we had to switch up the numbers a bit by going forward and then the steady lines,” he said. “I didn’t want the course to be all steady when we were walking it. I and my entire barn focused on doing the forward strides and then collecting right after.”

Visibly pleased with the result, Morris offered a special perspective on the top riders, commenting on how fun it is for him to see the children of the children winning. “I raised her [Lucy’s] mother and when I looked over to her, she looked exactly like Lisa,” he said. “It’s very fun for me to see the descendants all ride beautifully. Thank God I’m not in this anymore having to ride against them.”

Torano added that the results were no surprise to the panels. “The cream rose to the top. We saw a lot of great riding, but the top four are the ones that belong where they are,” he said.

Ingram capped the top four and her mount Comanche was presented with the Best Turned Out Horse Award, while Deslauriers’ Class Action was honored as the Best Equitation Horse. Other special awards included Special Family Awards presented to the families of the Champion and Reserve Champion, as well as monetary Trainer Awards to the top eight and a Trophy and Jacket to Mario Deslauriers as the trainer of the Champion.

Olaf Petersen Jr. of Germany set the 1.45m speed course on Friday with 42 entries and 12 clear rounds. Bucci and SPCS’s Heartbreaker vd Achteroe had the winning time of 64.15 seconds. They beat out Laura Chapot and Quointreau un Prince, owned by Chapot and McLain Ward, who finished second in 65.19 seconds. Sweetnam and Spy Coast Farm LLC’s Beluga clocked in at 66.54 seconds to place third. Eric Lamaze (CAN) guided Carol Sollak’s Brooklyn Blues to fourth in 67.50 seconds.

Class winner Heartbreaker vd Achteroe is an eight-year-old Belgian Warmblood gelding (Bentley van de Heffinck x Catango Z) that Bucci has had for less than six months. Although they are still getting to know each other, they had a great round on Friday, and Bucci thinks that in time they will be even faster.

“I have not had him for so long. He is quite green, but he is a very good horse,” Bucci stated. “I am just getting to know him. He is really a sport horse. He is competitive. When I know him better and he is more experienced, I think I could do this course even two seconds less. I started at the beginning holding him a little bit, but still he was really fast.”

Chapot was leading with a very fast time before Bucci entered the ring, but he rode his own plan. “I didn’t see Laura, but I had my course in my mind and I didn’t want to change it because of her,” he explained. “I tried to do my best and it was enough today, luckily.”

Watch Piergiorgio Bucci and Heartbreaker vd Achteroe in their winning round!

Although he has been to Wellington to visit before, this year is Bucci’s first time showing at the Winter Equestrian Festival.

“I have been here three or four times, but this is my first time with my horses competing,” Bucci explained. “Unfortunately, my best horse was injured after the first week, so I struggled a little bit with the others because they are young. It is tough classes to win here for anyone, but I am happy for this win, to get some confidence. It feels very good.”

Based in Holland, Bucci will return to Europe and plans to compete for Italy in the Nations Cup in Lummen, Belgium, at the end of April. He has other horses resting at home and will continue to develop the young ones that showed throughout WEF.

WEF 11 continues on Saturday with the $127,000 Engel & Völkers Grand Prix CSI 4* in the International Arena in the evening. Highlighting hunter competition, the Bainbridge Amateur Owner Hunter 18-35 Champion will be crowned. For full results and more information, please visit www.pbiec.com.