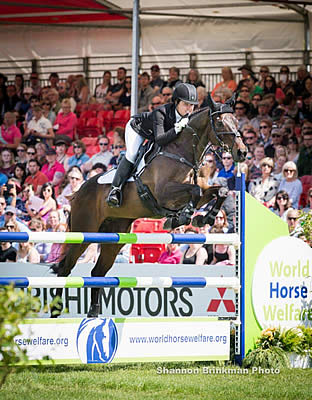 Badminton, Gloucestershire, England – The 2016 Mitsubishi Motors Badminton Horse Trials CCI4* came to an exciting conclusion on Sunday over Kelvin Bywater’s show jumping track. U.S. duo Libby Head and Sir Rockstar brought their wonderful weekend to a close by finishing in 31st place on a score of 89.4. Michael Jung (GER) made history by winning the $350,000 Rolex Grand Slam of Eventing after clinching the Badminton title with La Biosthetique-Sam FBW.

Head (Talbotton, Ga.) had a respectable dressage test with her own Sir Rockstar, tactfully riding through moments of tension to receive a score of 57.8 from the Ground Jury consisting of Marilyn Payne (USA), Andrew Bennie (NZL), and Angela Tucker (GBR). She and the 1998 Thoroughbred looked fantastic the whole way round Giuseppe Della Chiesa’s challenging cross-country track, which caused several problems for more experienced pairs, adding 27.6 time penalties to their score. They had a solid show jumping round with a single rail down at fence three to finish in 31st place on a score of 89.4. In addition, Head was awarded a Worship Company of Saddlers’ Saddle as the highest-placed competitor under the age of 25.

“He was jumping out of his skin,” said an ecstatic Head about her longtime partner. “I got a little nervous and didn’t really ride as well as I could have, but he really helped. He was jumping two feet over them I think. I don’t think I will ever forget coming here; it has been such an experience.”

The weekend for the other two U.S. combinations came to an end on cross-country day. Buck Davidson (Ocala, Fla.) had a smooth, relaxed dressage test with Sherrie Martin’s The Apprentice in the horse’s Badminton debut, earning a score of 45.7. He gave the 2004 Irish Sport Horse gelding a solid ride through some sticky moments on cross-country, but elected to retire at fence 28, Alexanders Silver Birch, after having a previous runout at fence 23, Shogun Hollow. Land Rover/USEF Eventing Competition Grant recipient Boyd Martin (Cochranville, Pa.) had a consistent dressage test with Lucy Boynton Lie’s Cracker Jack in the horse’s European debut to score 51.0. He was having an excellent cross-country round with the 2003 Thoroughbred gelding until fence 21, the KBIS Vicarge Vee, when a miscommunication resulted in a fall for both horse and rider. Both Martin and Cracker Jack walked away unscathed, and plan to reroute to the Luhmühlen CCI4* presented by DHL.

Jung’s textbook performances throughout the weekend set him up for success and enabled him to add more titles to his already phenomenal record. He had a beautiful dressage test with La Biosthetique-Sam FBW to earn an impressive score of 34.4. They tackled the substantial cross-country course with ease, adding no penalties to their score. Jung and ‘Sam’ had a nine-point lead heading into the show jumping phase, but did not need to rely on it as they jumped a masterful double-clear round to win on their dressage score. After winning the 2015 Land Rover Burghley Horse Trials CCI4* with La Biosthetique-Sam FBW last fall and the 2016 Rolex Kentucky Three-Day Event presented by Land Rover CCI4* with fischerRocana FST just a week ago, Jung’s Badminton victory makes him the second Rolex Grand Slam of Eventing Champion and the first in 13 years.

Fellow countryman Andreas Ostholt (GER) finished in second place with So Is Et on a score of 43.4, while Gemma Tattersall (GBR) and Arctic Soul ended up third on their dressage score of 44.6.