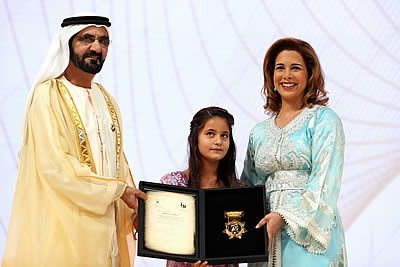 The FEI was not the only International Federation to be recognised at the awards ceremony. The International Judo Federation, also with a base in the Olympic capital of Lausanne, was presented with the International Organisation Award for its efforts in bringing judo and its values to children in Syrian refugee camps.

“For the FEI, it is particularly gratifying to see FEI Solidarity recognised in the award to our Honorary President Princess Haya, and to see our 2nd Vice President Sheikh Khalid honoured. It is good to see their services and commitment to equestrian sport getting this recognition,” said Ingmar De Vos, FEI President and FEI Solidarity Chair. “Speaking on behalf of the international equestrian community, I would like to congratulate all the athletes, teams and sports institutions who put their hearts and souls into winning these awards. Sport is an essential part of our global society. The creativity we see in the sports industry is very exciting, with clear benefits to the communities we all live in and are looking to develop for future generations.” 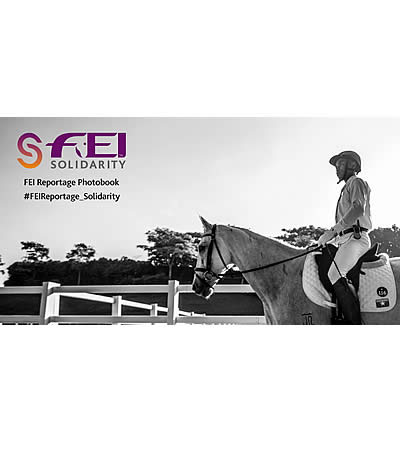 The FEI Solidarity Reportage photobook celebrates the hard work and commitment of everyone involved in grassroots equestrian sport development. (FEI)

Showcasing the progress of FEI Solidarity-supported riders at the recent South East Asian (SEA) Games 2015 in Singapore, to the first FEI Solidarity visit to a youth training camp in Bulgaria by FEI President and Chair of the FEI Solidarity Committee Ingmar De Vos, the FEI Solidarity Reportage photobook celebrates the hard work and commitment of everyone involved in growing equestrian sport from the ground up.

The Committee was given an update on ongoing projects supported by FEI Solidarity, and discussed applications for 2016 funding. There was also discussion on implementation of an improved communications strategy in order to increase visibility of the programme worldwide. FEI Solidarity’s support has been central to the ongoing growth, success and evolution of the programme since its debut three years ago.

“In the last year, FEI Solidarity has gone from strength to strength by providing expertise, funding and support in order to lay the foundations for future generations,” the FEI President said.

“I have been fortunate enough to see first-hand the passion, dedication and honest determination of those touched by FEI Solidarity, and the photobook is designed to introduce everyone to some of the athletes, grooms and officials who have benefitted from the various projects in place.”

All images in the FEI Solidarity Reportage photobook can be shared on Facebook and Twitter with the hashtag #FEISolidarity. 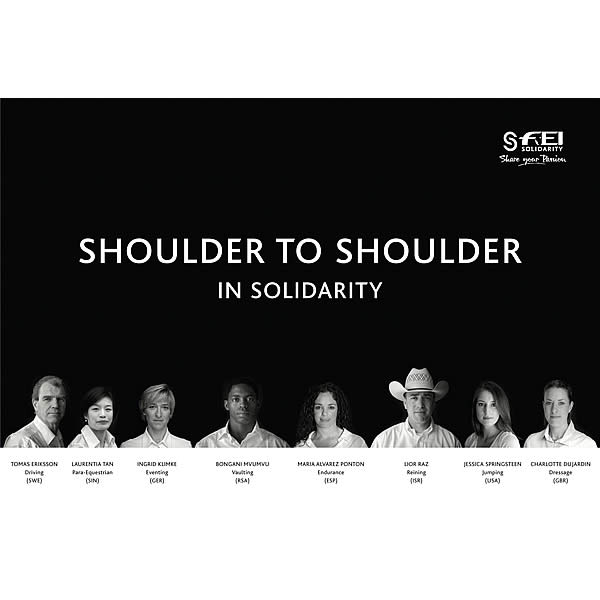 The FEI Solidarity Ambassadors, who include Olympic, Paralympic, world champions and national heroes, have formed a unique partnership to promote and develop the global equestrian disciplines governed by the FEI.

FEI Solidarity, launched in 2011 and inspired by the Olympic Solidarity model, is focused on providing opportunities for the next generation of athletes, as well as all those working in equestrian communities so that they can establish their own national structures for developing their sport.

The FEI Solidarity programme has so far supported 18 projects with funds as well as technical and consultancy services. These include horse-assisted therapy for seriously disadvantaged teenagers in South Africa, sports classes for multiple sclerosis sufferers in Sardinia, training of coaches to improve national sport development, and farrier and harness-making training in Cambodia with international charity World Horse Welfare. A further 15 initiatives will receive support from FEI Solidarity in 2013.

“FEI Solidarity is an exciting journey towards creating a more equal equestrian community, and is about us pulling together to develop exciting new projects that will develop the sport we all cherish, so that it is truly universal,” explained FEI President HRH Princess Haya.

“This is the first time that equestrians from across our disciplines have come together for one cause, and the calibre of our FEI Solidarity Ambassadors is exceptional, highlighting the true global reach of our development programme.

“FEI Solidarity is changing lives, and this united front of extraordinary equestrian ambassadors will help us to build and nurture the future of equestrian sport, making it possible for many more development initiatives around the world to become a reality.

“Our FEI Solidarity Ambassadors, and everyone working alongside us on this initiative, has a shared commitment and goal to amplify the voice of equestrian sport, guarantee its future worldwide, and to create future champions.”

“Today is a very special day for the FEI,” FEI President HRH Princess Haya said. “Thanks to our member federations, the FEI’s development efforts have now been given the prominent place in our Statutes that they so richly deserve. FEI Solidarity is a mirror of Olympic Solidarity and I am incredibly grateful to the IOC for guiding us through the creation of this new structure. For years we in the FEI have been struggling to find the best mechanism to deliver development to our sport and today our National Federations have given us a concrete solution.”

“I would like to congratulate the FEI on this exceptional initiative,” IOC President Jacques Rogge commented. “FEI Solidarity, following the example of Olympic Solidarity, will be providing assistance to the national equestrian federations, particularly to those with the greatest needs, so that they can develop their own potential and expand the sport in their country. This shows how committed the FEI is to the global future of equestrian sport and I am confident that the newly created FEI Solidarity will be very successful.”