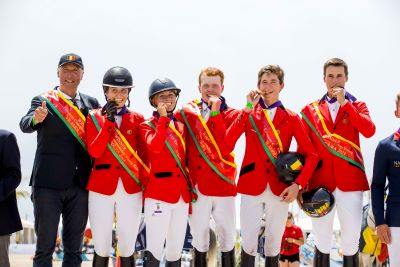 But in the battle for the Team medals, Belgium secured an incredible hat-trick of wins in all three categories.

The Junior Team title was the first to be confirmed when “the fantastic five” led by Rik Deraedt, who has been Chef d’Equipe for more than 10 years, claimed the honours for Belgium. Bart Jay Jr. Vandecasteele (Mac Jack Courtier), Aurelia Guisson (No Limit), Anthony Philippaerts (J’Adore ven het Schaeck), Tristan Guisson (Naturelle), and Evelyne Putters (Uith de Rotes) completed on a final score of 9.83.

Ireland’s Tom Wachman and Fireball were leading the Individual rankings ahead of Britain’s Vernon and Alice Laine from France going into Saturday’s finale. But a fence down in the third round of competition proved costly for Wachman who had to settle for fifth place in the final analysis, behind Laine in fourth.

It was a close-fought battle for the podium placings, with Vernon clinching gold on a score of 4.39 while Belgian siblings, Tristan and Aurelia Guisson, took silver and bronze on 4.4 and 4.6, respectively.

However, in Sunday’s Individual Final, Schibrik slipped to fifth, and it was team gold medallist Emilie Conter from Belgium who stood on the third step of the podium, while Whitaker held on to silver medal spot and Westendarp stood firm for the gold.

The French side of Dan Eschmann (Valdiva Frivole), Margaux Chereau (Vidocq de Paline), Timothee Goffinet (Valserine du Bois), Lana Messina (Quactus du Leon), and Cassandre Roquain (Balzane des Roches) were top of the Children’s leaderboard after Friday’s second competition. However, they dropped to equal-fourth with Ireland the following day which allowed the second-placed Belgians to rise to the top.

The Children’s Individual Final was the most exciting finish of the week when coming down to a five-way jump-off to decide the medals. Finland’s Hugo Kogelnig riding Vermont 2 galloped home in a fast time of 30.72 seconds, but Hungary’s Gyula Szuhai Jr. riding Perthy Jackson snatched away the gold when crossing the line in 30.43. Switzerland’s Lou Puch and Vitalhorse Un Amour La Goula collected eight faults to slot into fifth place, and there was the closest contest for bronze between Belgium’s Seppe Wouters and Czech Republic’s Anna Marie Vitek (Chacco’s Amke), who both had a single fence down and were separated by just over half a second on the clock, Vitek getting the medal-winning edge.

Jean Jacques Mathis, Belgian Chef d’Equipe for the Pony and Children categories, was “happy and amazed by the rare, if not unique, result achieved” by his athletes. And he could be proud that many of the competitors on the Young Riders team were also coached by him earlier in their careers.

Rik Deraedt, Belgian Chef d’Equipe for Juniors and Young Riders, talked about the great team spirit in the Belgian camp and the level of talent that shows so much promise for the future.