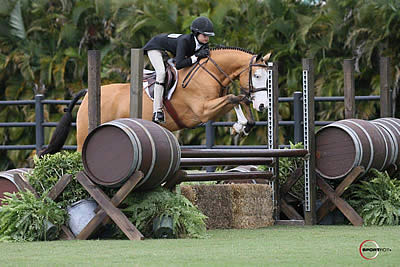 Fifty-three young riders on perfectly-braided ponies ventured to the Derby Field at Equestrian Village on Friday, March 8, for the $5,000 USHJA Pony Hunter Derby, presented by NickerDoodles. The class was part of several highlight national hunter events during Week 9 of the 2019 WEF. Of the 53 combinations, 18 entries consisted of large ponies, 22 were mediums, and another 13 were in the small pony category. When all rounds were completed, Cecelia Perry and Pokerface led the round of honor with the top score of 167.00 total points.

After a first-round cut-off score of 76.00 points, the top 14 ponies were combined from all three sections and invited to jog to determine who would return for round two.

Of the 14 to jog, 12 pairs were asked to learn Danny Moore’s handy course which consisted of a trot fence and several rollbacks where riders could display their ponies’ handiness.

Lambre and Chapilot Come Back for Five-Star Win

For the second day in a row, the Brazilian national anthem played and the flag was raised at WEF. While Eduardo Menezes captured Thursday’s five-star win, it was his countryman Rodrigo Lambre who sped to victory on Friday. Lambre and Chapilot, owned by Mario Onate, topped a field of 55 competitors in the speed format of the $36,000 Bainbridge 1.45m Classic CSI 5*.

There were 15 clear rounds in the class, all competing over a course designed by Alan Wade of Ireland. The early leader, going third in the order, was Carlos Hank Guerreiro (MEX) riding H5 Stables’s H5 Market Irminka. They were quick in 60.90 seconds, which would hold up for 12 rounds until Lambre entered the ring and brought the winning time down to 60.34 seconds. Third place went to another early ride (sixth in the order), Daniel Bluman (ISR) riding Over the Top Stables LLC’s Entano, who stopped the timers in 62.42 seconds.

While Laura Chapot always has a shot at winning when it comes to speed, she had an even bigger advantage when she and Mary Chapot’s Chandon Blue returned as the final pair for the jump-off in the $36,000 Griffis Residential 1.45m Classic CSI 2*. They sped around the shortened course to take the win in a time of 35.37 seconds, two seconds faster than second place finishers Rodrigo Pessoa (BRA) and Hillside Farm Inc.’s Farrero, who went first in the jump-off and almost had the wire-to-wire win.

“It’s always nice to be last in the jump-off,” said Chapot. “The main question in my mind was whether there were eight strides to the last jump and after a few went, it seemed like that was a possibility if you got the right fence in. I know my horse is naturally very fast, so I don’t want to get too caught up in the numbers around the turn and just try to ride it as smoothly as possible. I caught a really good one coming to that last line so the eight was even just nice and easy for him.”