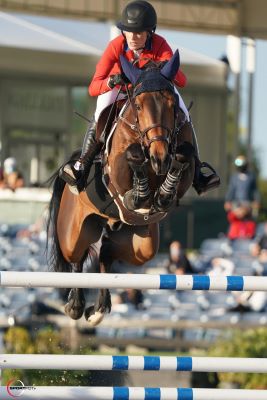 Wellington, FL – March 5, 2021 – The hometown squad stepped up to shine under the lights during the week eight CSIO4* as the team from the United States of America claimed victory in the $150,000 Nations Cup CSIO4*, presented by Premier Equestrian, in the International Arena on Friday, March 5, at the Winter Equestrian Festival (WEF).

In an adjusted format, the opening round was held at 4:30 pm EST while the second round was held under the lights in the International Arena getting underway at 7:30 pm EST, with both phases over a course designed by Steve Stephens (USA) and Nick Granat (USA). After the first round, each team dropped their highest score, with all eight teams from the opening phase qualifying to return for the second round under the lights.

Ireland held the lead after the first round of competition as all four team members, Shane Sweetnam, Bertram Allen, Michael Duffy, and Cian O’Connor, jumped fault-free rounds. The home team United States came in just behind the Irish, carrying one fault total while Israel returned in third position, on a four-fault score.

In the second round, the NetJets U.S. Jumping Team, consisting of Lillie Keenan aboard Fasther, Brian Moggre with Balou De Reventon, Bliss Heers on Antidote De Mars, and Jessica Springsteen riding Don Juan Van Donkhoeve, and coached by Chef d’Équipe Robert Ridland, jumped into the lead carrying a score of zero down the home stretch.

Competition in the DeNemethy Ring began on Saturday morning with the Platinum Performance/USEF Show jumping Talent Search 3*. Twenty-seven riders entered the class hoping to earn the blue ribbon and, in the end, it was Alexander Alston aboard Missy Clark and North Run’s Campreoll who were named the winners.

The class tested riders over a technical first round course, designed by Guilherme Jorge (BRA), of 11 fences, including an open water jump. The top 12 riders returned for a flat test where competitors were asked to show a sitting trot, lengthening of stride, and counter canter. Alston, of Gahanna, OH, and Campreoll impressed the judges during both phases of the class to take home the top prize.