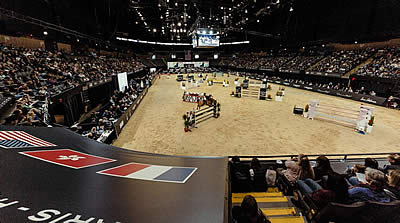 New York, NY – Thirteen Olympians and four of the top-ten riders in the world will ascend on the northeastern United States for the Longines Masters of New York, running April 25 through 28, 2019, at NYCB LIVE, Home of the Nassau Veteran’s Memorial Coliseum.

The Longines Masters of New York features the 2019 edition of the Longines Grand Prix of New York and the fourth leg of the innovative Riders Masters Cup, which pits Riders Europe and Riders USA teams against each other in multi-phase transatlantic duels. All the action will be made even better with decorated riders representing 12 countries across the globe coming to New York with their very best equine athletes to compete.

From world No. 2 rider McLain Ward and four-time Olympian Beezie Madden of The United States to former world-ranking leader Harrie Smolders of The Netherlands and Darragh Kenny of Ireland, equestrian powerhouses will turn out in full force for the Longines Masters of New York. But they will be contested by some of the sport’s rising stars in Belgium’s Olivier Philippaerts, France’s Edward Levy, and Egypt’s Nayel Nassar, as well as Adrienne Sternlicht, Lillie Keenan, and Jennifer Gates of The United States.

See The Masters One Riders.