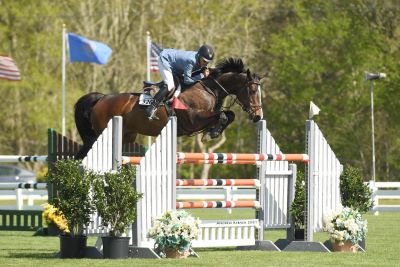 The Week V installment of the No Entry Fee Grand Prix welcomed twenty-three horse and rider teams to the world-class grass grand prix field to compete for the win in the $25,000 Harrah’s Gulf Coast Grand Prix over a course designed by Paul Jewell of Windsor, New Jersey.

With the first round time allowed set at 83 seconds, only four horse and rider teams would advance to a jump off round.

Brian Murphy of Ocala, Florida in the irons of Light Speed Equestrian, LLC’s Hyperios HS was the first to tackle the jump off round with a time allowed of 50 seconds. The pair earned four jump faults and then opted to retire which would place them in fourth place overall.

Holly Shepherd of Grand Bay, Alabama aboard Loretta Patterson’s CHS Krooze followed in the jump off order and turned in a fault free round in 38.466 seconds and set the new time to beat.

Shannon Hicks of Lake Saint Louis, Missouri and Helen Gilbert’s Emir D followed Shepherd and Krooze in the order of go, but four jump faults in a time of 42.140 seconds wouldn’t beat the class leader.

Murphy returned to the grand prix field, this time in the irons of Edith Rameika’s Semi-Automatic C. After earning eight jump faults, the pair opted to retire and earned a third place ribbon and insured a second place finish for Hicks and Emir D.

Laura Connaway of Little Rock, Arkansas rode her own Quite Funny to a fifth place finish after earning one time fault in their first round, which they finished in 83.308 seconds.

Kara Jones of Cornelius, North Carolina and her own End Game won sixth place for their two time faults first round of 84.801 seconds.

Gianna Aycock of Argyle, Texas piloted her own La Belle Sauvage to an eighth place finish for their four-fault first round in a time of 77.316 seconds. Aycock also earned a twelfth place ribbon with her own Flex A Tia.

Hakini, owned by Ellen Walker and ridden by Adam Sklansky of Skillman, New Jersey, finished in ninth place after earning four jump faults in their first round with a time of 79.880 seconds. Collin Reynolds of Oxford, Pennsylvania rode his own Chicco W to a tenth place finish.