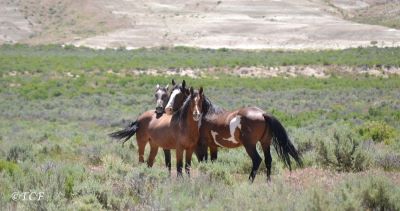 BLM has called an end to the abuse-ridden wild horse roundup inside Sand Wash Basin HMA. It’s believed that massive public outcry and political pressure from Colorado Governor Polis influenced the agency’s decision to stop the roundup before they reached their goal of capturing 783 horses.

Sadly, roundup operations continue outside the HMA to the north, almost to the Wyoming border. There are advocates on the ground documenting, and we will keep you informed as we learn more.

In a press release, The Cloud Foundation founder and former Wild Horse Advisory Board Member Ginger Kathrens called upon the BLM to change course:

“The brutal Sand Wash roundup is over, thanks to the thousands of calls, messages, and emails from people not only in the United States but around the world who value our wild horses. It’s shameful that the BLM does not value them at all. The inhumane practices in this roundup are blatant violations of the BLM’s own animal welfare guidelines. It is high time that this program be totally reviewed, and the travesties of the past be corrected.”

TCF worked in conjunction with the Sand Wash Advocacy Team (SWAT) prior to the roundup in an effort stop what – predictably – became a deadly event. Your efforts resulted in nearly 9,000 messages, calls, and emails sent to BLM and our political leaders. YOU made a difference in the lives of the Sand Wash horses who have been spared.

Thank you for your support of our cherished wild horses and burros. You can read the full press release here.