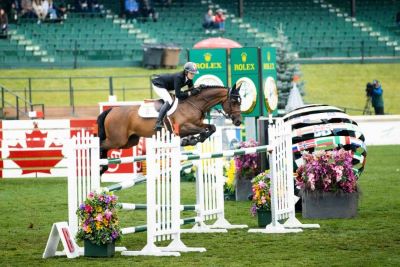 Twenty-five combinations contested Saturday’s 1m50 Suncor Winning Round in a wet International Ring following overnight and early morning rain. However, spectators’ spirits were not in the slightest bit dampened, as they were treated to some world-class performances from not only Canada’s finest equestrian athletes, but also a number of leading riders from eight other nations, who descended on Calgary for the 2021 edition of the Spruce Meadows ‘Masters’.

Round 1’s proceedings were dominated by the home nation, with four Canadian riders amongst the 10 who eventually progressed to Round 2, including Tiffany Foster and her 15-year-old gelding, Brighton, Amy Millar and her 11-year-old gelding, Christiano, and the experienced duo of Eric Lamaze and Jim Ifko, who were partnered by 11-year-old gelding, Kino, and the 12-year-old La Silla-bred mare, Celine Ls La Silla, respectively. The Irish trio of Jordan Coyle (Centriko Volo), Daniel Coyle (Ivory TCS), and Conor Swail also made the top-10 cut, and were joined in the Winning Round by the talented 23-year-old Belgian, Zoe Conter (Dawa De Greenbay Z), the in-form Egyptian, Nayel Nassar (Igor Van De Wittemoere), and British rider, Matthew Sampson (Geneve R).

But in the end, it was Tiffany Foster’s day to shine in front of an enthralled crowd, after she and the brilliant Brighton did enough to see off a late challenge from Conor Swail, beating him to top spot by three tenths of a second, with the current world number 59-ranked rider, Nayel Nassar, slotting into third place.

Delighted with her long-time partner, Brighton, Foster commented: “The Suncor Winning Round here at Spruce Meadows is a kind of unique event, as you know you don’t carry your faults, which means you’ve got to get into that top 10, so it’s always better to carry a little bit of rhythm. Brighton seems to love this class, so I just ride my round. The good thing about him is he’s super-fast, so even if I happen to have one down, I’m usually in with a shout, but he’s clear more than not!”