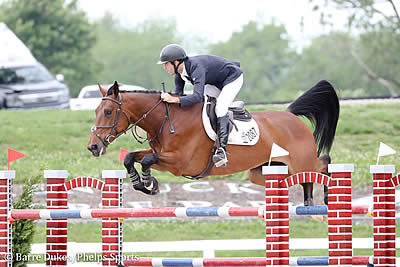 Genn’s grand prix lap of honor was followed by the presentation for the Leading Open Jumper Rider Award, sponsored by Envisian Products, which he earned in part with Alex Granato (USA). Both athletes tied for points to share the award after Granato rode to first place in Saturday night’s $134,000 Mary Rena Murphy Grand Prix CSI3* with Carlchen W.

Earlier in the day, the sport’s up-and-coming athletes took to the ring in the $15,000 Under 25 Grand Prix in the Rolex Stadium. Eighteen horse-and-rider combinations tackled Bywater’s course, which asked pairs to complete 14 efforts under the time allowed of 71 seconds. With five pairs advancing to the jump-off, it was ultimately Brian Moggre and MTM Los Angeles who tackled the course expertly to walk away with the blue ribbon.

Hunter competition in the Stonelea Ring began with the highlight of the day, the $5,000 USHJA National Derby, sponsored by the World Equestrian Center and Kentucky Horse Shows. After taking the win in the $10,000 USHJA International Hunter Derby in the previous week at the Kentucky Spring Horse Show, Havens Schatt returned to take another impressive win in the hunter ring, this time with Caroline Moran’s Happy Thoughts. The pair claimed their victory after scoring a total of 185 points.