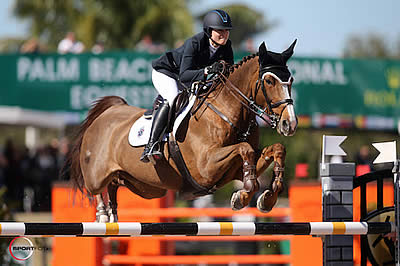 Wellington, FL – February 11, 2016 – USA’s Reed Kessler and Cylana were the winners of the $130,000 Ruby et Violette WEF Challenge Cup Round 5 on Thursday afternoon at the 2016 Winter Equestrian Festival (WEF) in Wellington, FL. Competing in the International Arena at the Palm Beach International Equestrian Center (PBIEC), Kessler and Cylana topped the week five class over Elizabeth Gingras (CAN) and Coup de Chance in second, and Yann Candele (CAN) aboard First Choice 15 in third.

Watch Reed Kessler and Cylana in their winning jump-off round!

WEF 5, sponsored by Fidelity Investments®, runs February 10-14, 2016. The week will feature the $380,000 Fidelity Investments® Grand Prix CSI 5* on Saturday, February 13, for which Thursday’s Challenge Cup competition was a qualifier. Other highlights include the $35,000 Illustrated Properties 1.45m Classic on Friday and the $86,000 Suncast® 1.50m Championship Jumper Classic on Sunday. The 12-week WEF circuit runs through April 3 offering more than $9 million in prize money.

Bob Ellis (GBR) is the course designer for international CSI 5* competition throughout week five. For Thursday’s $130,000 Ruby et Violette Challenge Cup, Ellis saw 55 competitors, with a 13-horse jump-off to follow. Seven were then double clear over the short course.

Katie Dinan (USA) was first to return with Grand Road Partners’ Nougat du Vallet and set the pace at 45.82 seconds, eventually placing seventh. Margie Engle (USA) and Elm Rock Partners’ Royce were next to clear the short track in 41.58 seconds, finishing fifth. Gingras and B Gingras Equestrian Ltd.’s Coup de Chance followed with a time of 38.64 seconds, soon settling for second place. Kessler and Cylana were next to clear the short course and took the lead in a time of 38.03 seconds that would hold on for the win.

Candele and the Watermark Group’s First Choice 15 clocked in at 39.23 seconds to secure third place honors. Cian O’Connor (IRL) and Adena Springs and Ronnoco Jump Ltd.’s Good Luck followed with a double clear in 40.97 seconds to place fourth, and Eduardo Menezes (BRA) locked up the top six with his time of 43.27 seconds aboard Quintol.

Kessler did not compete at WEF in 2014, opting to remain in Europe for the winter, but in an Olympic year the young rider chose to show on home turf early in the season. Kessler was the youngest rider ever to compete on the U.S. Olympic Show Jumping Team at the age of 18 four years ago, and now has her sights set on once again securing a coveted spot on the team. She hopes to make that dream come true once more with Cylana, her now 14-year-old Belgian Warmblood mare (Skippy II x Darco), owned by Kessler Show Stables.

“My horse has been jumping so well. She is really feeling well,” Kessler said after her victory Thursday. “She had a great fall in Stuttgart and Geneva, and she jumped beautifully last week, so I could not be happier with her.”

“It is an Olympic year, and it is my number one goal to try to make the team again,” Kessler declared. “The first step is to make the short list, and I had a long talk with my Chef d’Equipe and he suggested that for the selectors to see everybody, it would be good to do a few weeks here. I did last week and this week. Now I go back to Holland for two weeks to jump some other horses, and then I come back and [compete] another two weeks here.”

Since competing in the 2012 Olympic Games, Kessler has had made a lot of changes in her program and her riding. One big difference is her flat work, as the rider explained that she has been working with Spanish dressage rider Morgan Barbançon Mestre, a close friend.

“I was only just turning 18 this last cycle of Olympics, so a lot has changed for me,” Kessler noted. “I am a young rider. I went out on my own this year. One of my best friends rode at the Games for the Spanish dressage team and she started helping me at the end of the summer and that has made the biggest difference for sure in my riding. I think my flat work is night and day and my horses are much better for it. They have all put on muscle in places that they have never had muscle. I can easily leave out one, maybe two strides in every jump-off I do now because I have such a better connection with all of them turning.”

The extra work combined with her longtime partnership with Cylana was an advantage for Kessler in Thursday’s jump-off.

“She is an amazing horse. I have had her so long, and I know her like the back of my hand,” Kessler stated. “I am really blessed because she is a horse that is really easy on herself physically, knock on wood. She is very sensible, she is brave, and she is experienced now. She goes her best with a lot of blood, so I can save her. I did not jump a class this week. I just put her straight in the qualifier, so I think in that way I am really lucky because she is easy on herself and it is easier for her to stay sound.”

“I would love to win the grand prix with her. That’s why I am here, is to show her off,” Kessler said. “She is in great form. She is in great condition, and she is jumping beautifully, so as long as I ride her well she is going to keep jumping well.”

In addition to the winning prize money, Kessler picked up a $3,000 bonus for wearing SSG ‘Digital’ style riding gloves as part of the SSG Gloves ‘Go Clean for the Green’ promotion.

The very competitive CWD Saddlery 3’6″ Performance Working Hunter concluded in the Rost Arena on Thursday morning. Thirty-five horses vied for the championship honors, resulting in a California split of the division. Kelley Farmer and Dalliance were crowned Section A champions, and Tara Metzner piloted Celebrity to the Section B championship title.

Kelley Farmer, of Keswick, VA, piloted well-known mount Dalliance to 24 points on their way to the champion honors this week. The pair earned two second place ribbons, as well as a first and fourth over fences.

Farmer has been competing Dalliance, who is a 13-year-old Dutch Warmblood owned by Avatar Real Estate, for a little over a year. The pair has stacked up quite a few blue ribbons, including a USHJA International Hunter Derby win.

“He’s just a good horse,” Farmer said about the gelding’s character and temperament. “He’s always careful, always jumps good, always quiet; he walks from the stall to the ring.”

“He’s a little bit like a pony. You kind of have to rev him up, but he’s got tons of jump. He’s a winner,” she remarked. Farmer will continue to compete the gelding in the 3’6″ Performance Hunter Division as well as the High Performance Hunter division throughout the rest of the WEF circuit. She also plans to show him in the USHJA International Hunter Derby during Week 12.

Tara Metzner, of Rancho Santa Fe, CA, was pleased with Celebrity’s performance this week. The pair placed first, seventh, second and third over fences and fourth in the under saddle. “The courses were nice. I found the lines a little more open today than yesterday so we got to show off a little and gallop,” Metzner said about her jumping rounds on Thursday.

Celebrity is a nine-year-old gelding owned by Davlyn Farms, who was originally meant to be an equitation horse. Purchased and imported from Europe as an eight-year-old, the gelding suffered an unfortunate bone bruise upon his arrival in the United States, which sidelined him from competition for six months.

Once Metzner began showing Celebrity last summer, it became apparent to the team at Davlyn Farms that he should be a hunter. “The more we ride him, the fancier he gets, so we decided to make him a hunter instead of an equitation horse,” Metzner explained. “He’s just such a good egg. He gets better each time in the ring.”

Celebrity also competes in the Low Adult Hunter division with rider Tammy Williams. While Metzner generally shows the gelding in the Performance Hunter divisions as a warm-up for Williams, the more she shows him, the more she believes he will make an excellent derby horse. “For sure I think he’s going to end up being a derby horse. He’s super brave. We’ll probably start doing those at the end of the season here and see how it goes,” she said.

The Section A reserve championship was awarded to Louise Serio and eight-year-old gelding As Promised, owned by Meralex Farm, Inc. Section B reserve honors went to Holly Orlando and Tidal Wave, who is owned by Elizabeth Monaco.

The fifth week of competition at WEF will continue on Friday with the Camping World Adult Amateur 50 and Over Section A, which will be held in the E. R. Mische Grand Hunter Ring. Jumper action will also continue in the International Arena with the $35,000 Illustrated Properties 1.45m Classic. For more information and full results, please visit www.pbiec.com.