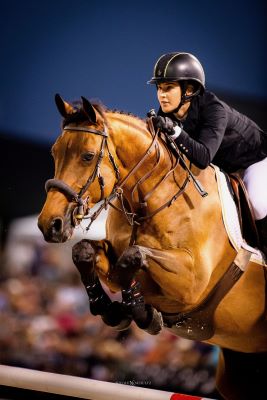 Mill Spring, NC (July 21, 2022) – Gabriela Reutter of Lumière Horses found herself on the podium this week at Tryon International Equestrian Center. She and her Grand Prix mount, Maharees Rock (OBOS Quality x Ballysimon), put in their second top 3 FEI CSI finish of the summer during Tryon Summer 5’s $75,000 Grand Prix CSI2-star out of 50 entries. The pair has been proving their mettle at the top of the sport, once again delivering a top finish after doing the same in Traverse City’s CSI3-star in June. The 2010 Irish Sport Horse mare also known as Rocky has been with Reutter for three years, making her FEI debut and subsequent top placings under Reutter’s guidance.

Reutter’s success at Tryon also marks her first podium finish in a nighttime Grand Prix, cheered on by a stadium full of spectators. Their double clear effort and jump off time of 40.21 secured their spot on the podium for Chile, finishing third behind USA’s Caitlyn Connors (37.86) and Colombia’s Roberto Teran Tafur (38.76). Reutter and Rocky also jumped to 4th out of 44 entries in the $6,000 1.40m earlier in the week.

“It was incredibly special to finish 3rd in a CSI2-star class, and to stand on the podium under the stadium lights,” said Reutter. “The evening classes have an amazing atmosphere, and I was so pleased with Rocky’s performance. She has amazing athleticism and scope, and when we are working together and on our game, she really delivers for me.”

Reutter also campaigned three top jumper prospects during Tryon Summer 5. Lumière Horses’ Here I Am Z, who was imported by Reutter from South America in 2020 placed 2nd and 3rd in the Open 1.30m Jumpers. Known as Hero around the barn, this sporty bay gelding has been placing consistently in the 1.30m divisions with Reutter and would make an exceptional Junior mount. Reutter also jumped the gray mare Joselind L.A.T., a.k.a. Jojo, to a 3rd, 5th, and 13th finish in the 1.15m & 1.20m divisions, and took Billy Lincoln, a new import, to a double clear finish in the $2,000 1.30m Open Jumper to finish 10th in their first show together.

Jojo and Hero are offered for sale and available for trial this week at Tryon International Equestrian Center.

To date, Gaby is currently the #1 female Chilean show jumper, and has multiple top finishes in international FEI classes, including her Nations Cup accomplishments, European tour, the U25 Grand Prix divisions, and victory in an FEI 4-star event. She currently campaigns her anchor show jumper, Maharees Rock (a.k.a. Rocky), and a string of sales horses. Her international equestrian CV also includes Spruce Meadows, The Hampton Classic, and several junior/young rider South American Games. She and Rocky were in the top 3 in the $30,000 Pilates Rock Grand Prix during WEF 1, and in 2018, Reutter received her certificate of capability for the Pan American Games following a top 3 finish in the FEI 3-star 1.50m Captive One Classic.