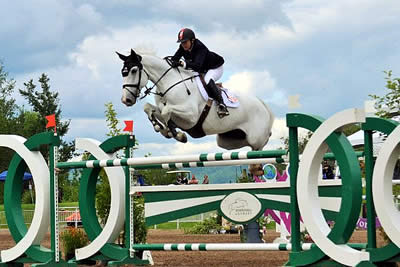 Jill Henselwood is the first out on for the jump-off with Bolero HX, an 8-year-old Dutch half-blood. The pair establishes the time to beat with a clear round in 40.95 seconds. None of the following five teams will be able to take her out of first place. Andrew Bourns on Bart C came close to second place, but a bar down left them in fourth. American rider Denise Wilson, competing in Bromont for the first time, took second place with Quidam’s Hero, while Canadian rider Kelley Robinson and her mount Enzo, rounded up the Top 3.

International Bromont wishes to acknowledge Jaclyn Duff’s presence on the Olympic Park’s site on Thursday July 17. Jaclyn will join Elizabeth Gingras, Jordan MacPherson and Jill Henselwood in Europe to complete the Canadian show jumping team. The four riders will participate in the CSI3* show in Ascona, Switzerland next week, from July 24 to 27, before heading for Nations’ Cup competition at CSIO 3* – W Bratislavia, Slovakia August 7 to 10, 2014.

The International Bromont promises an unforgettable 2014 edition with six new FEI events, the return of the Royal Canin Challenge on Sundays July 20 and 27 (in collaboration with the Club d’agilité de la Montérégie), its two Speed Derbies and its Hunter Derby. For more details on the programme, visit our Internet site at www.internationalbromont.org.

Held in Quebec, in the picturesque setting of the Eastern Townships region, near Vermont’s border, the International Bromont, a hunter and show jumping competition, presents its thirty-ninth edition at the Bromont Equestrian Olympic Park from July 10 to 13, 16 to 20 and 23 to 27, 2014. International Bromont would like to thank the Ministère de l’Éducation du Loisir et du Sport as well as the Ministère du Tourisme du Québec for their support. General admission seats: $10 per person and free for children under 12 years old. Privilege seating: $25 a ticket.