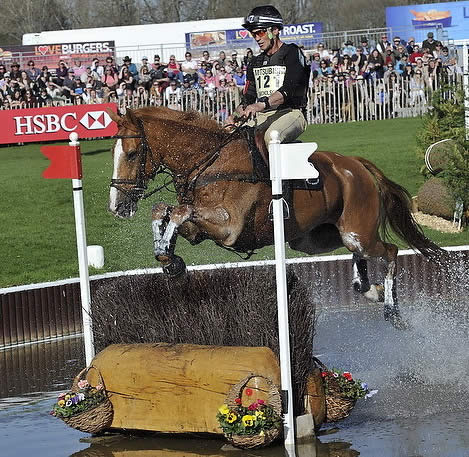 Lausanne (SUI), 12 June 2013 – Andrew Nicholson (NZL), who holds a commanding lead in the HSBC FEI Classics, heads to Germany this week for the penultimate leg of the series at Luhmühlen CCI4*, presented by DHL PAKET (13-16 June).

Nicholson, the 2012 HSBC Rankings champion, is clearly not about to squander his excellent chance of becoming the first Kiwi to head the HSBC FEI Classics, and is travelling to the premier German event with three good rides.

William Fox-Pitt (GBR), three times a winner of the HSBC FEI Classics and currently third in the rankings, also has three top rides: his 2012 Olympic horse Lionheart, Neuf des Coeurs and Cool Mountain. The latter, a CCI4* winner at Kentucky in 2010 and a world team gold and individual silver medallist, is back in work after a season’s absence through injury.

Two more combinations from Britain’s Olympic silver medal team will be in action at Luhmühlen: Nicola Wilson rides the crowd-pleasing Opposition Buzz, a brilliant Cross Country horse, and Zara Phillips has re-routed High Kingdom after his run-out in the Badminton lake.

Two members of Australia’s Olympic team return to Luhmühlen after good placings here last year: Lucinda Fredericks, back in action after breaking her collarbone in a fall this spring, comes back with Flying Finish, the 2012 runner-up, and Andrew Hoy has Rutherglen, who finished sixth in 2012.

A strong home entry includes double Olympic gold medallist Ingrid Klimke on Tabasco TSF, a dual CIC3* winner, Bettina Hoy on Lanfranco TSF, the horse that has brought her back to top level with 10th place at Burghley last year, and Julia Krajewski, who rides London-Return and has strong claims to the HSBC Training Bursary awarded to the best first-time CCI4* completion.

Luhmühlen is an important event for the German squad, as it is the major selection trial for the HSBC FEI European Eventing Championships in Malmö (SWE) in August.

Cross Country Course Designer Mark Phillips (GBR) says that although his track runs on a similar route to last year, it is “a very different CCI4* test which will require concentration all the way round”.

The first water complex comes up at fence 4, the DHL PAKET Komplex, with a big boat fence into the water and a bounce distance out up a step and over another boat. The biggest fence on the course is the Gärtnerei Wredes Rennbahnsprung at 7, which is 1.45m and 2m wide at the top and 3m wide at the bottom.

Capt Phillips says the HSBC Complex at 9-12 in the main arena is, again, the most technical, with two hedge to corner questions on acute angles. “Hopefully, all horses and riders will come home with a smile on their faces,” he says.