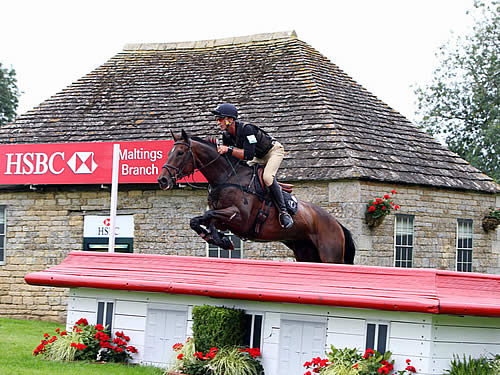 Andrew Nicholson, pictured here at the Land Rover Burghley Horse Trials 2012 with Calico Joe, is all set for this year’s edition (5-8 September), which will be the last leg of the HSBC FEI Classics 2012/2013 series. (Photo: Kit Houghton/FEI).

Lausanne (SUI), 4 September 2013 – World number one Andrew Nicholson (NZL) will be the rider in the spotlight at this weekend’s Land Rover Burghley Horse Trials (GBR) on 5-8 September, the last leg of the HSBC FEI Classics 2012/2013 series.

The runaway leader of the current HSBC FEI Classics series followed victory at Burghley 2012 with a remarkable run of three more CCI4* wins (at Pau, Kentucky and Luhmühlen), and few would bet against this superb horseman extending his winning run to include a fourth trophy at the beautiful Lincolnshire venue.

Nicholson, also the leader of the HSBC Rider Rankings, is the only competitor with three rides: he has last year’s winner, the attractive grey Avebury, plus Pau winner Nereo and the racing-bred Irish Thoroughbred Calico Joe, a strong galloping horse with good CCI4* form.

His perennial rival William Fox-Pitt (GBR), second on the HSBC FEI Classics leader board and also lying second in the HSBC Rankings, has two chances to extend his remarkable Burghley record to a historic seventh win. Fresh from his individual bronze medal success at the HSBC FEI European Championships in Malmö (SWE), he rides the 2011 winner Parklane Hawk, a quality New Zealand Thoroughbred, and the classy Selle Francais Neuf des Coeurs.

There’s more to this fascinating competition than the old Nicholson/Fox-Pitt rivalry, however. At Badminton in May, both riders were quietly trumped by Jock Paget (NZL), who is breathing down Fox-Pitt’s neck in third place on the HSBC FEI Classics leader board. The stylish Kiwi brings his two best horses, Badminton winner Clifton Promise plus the equally talented Clifton Lush, and he could easily join the elite band of riders who have won both of Britain’s CCI4*s in the same 12 months.

Much interest will surround the Burghley début of Ingrid Klimke (GER), the newly crowned European team gold and individual silver medallist. She rides the 16-year-old FRH Butts Abraxxas, her partner in the last six team championships, and if they can show improved form in the final Jumping phase, they could take the top prize.

Klimke’s team mate, Andreas Dibowski, reunited with his top horse FRH Butts Leon, has winning credentials too, and if all goes right for Bettina Hoy with the enigmatic but talented Lanfranco, 10th last year, the German national anthem could ring out over Burghley for the first time in its 52-year history.

Other notable newcomers to Burghley are Paget’s friend and trainer Kevin McNab (AUS) with Clifton Pinot, fifth at Luhmühlen this year, Canadian Rebecca Howard with Riddle Master, 12th at Badminton, and Astier Nicolas, winner of a European team bronze for France in Malmö on Sunday. The 23-year-old Frenchman rides one of the youngest horses in the field, the nine-year-old “flying pony” Quickly Du Buguet.

Aside from the ever-reliable Fox-Pitt, British hopes also rest with the 2009 winner Oliver Townend, this time on the former Nicholson ride Armada, fourth last year; the 2003 victor Pippa Funnell, on the magnificent Redesigned; and Kristina Cook on the up-and-coming De Novo News.

Contenders for the HSBC Training Bursary, worth $1,000 to the highest-placed CCI4* newcomer, include Britons Matt Heath and Alex Postolowsky, as well as Wills Goodhew and Sophie Jenman, who are both just 21 years old.

Burghley’s undulating parkland always offers a true Cross Country challenge, but this year Course Designer Captain Mark Phillips has kept everyone guessing as he has re-routed the track. It starts in the opposite direction to last year, which means the arena fences, including Lord Burghley’s Hurdles, come early; the influential Discovery Valley (fence 5) asks a completely different question, and the famous drop at the Classics Leaf Pit is at fence 7.

Over 70 horses representing 11 nations will trot-up in front of the Ground Jury at the first horse inspection this afternoon. The Dressage phase, which opens what promises to be a thrilling competition, starts at 9am tomorrow.

Our signature twitter hashtags for this series are #HSBC and #Eventing. We encourage you to use them, and if you have space: #HSBC FEI Classics #Eventing