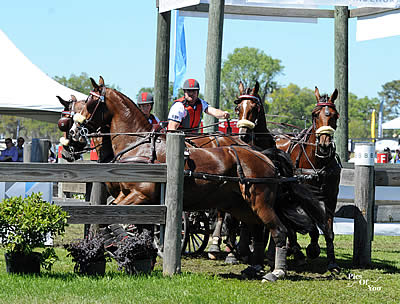 Ocala, Fla. – All five divisions of the USEF Combined Driving National Championships faced an intimidating yet thrilling marathon course at the Live Oak International on Saturday. The course included seven technical, compact obstacles questioning the obedience and athleticism of the equine athletes. This influenced the fluctuation in the top three across all divisions, while two new drivers took the lead in the intermediate single pony and intermediate pony pair divisions.

Weber (Ocala, Fla.) is one phase closer to acquiring his 15th four-in-hand national title. He and his powerful team of KWPN geldings (First Edition, eight years old; Boris W, 11 years old; and Asjemenou, 12 years old) and Reno (eight years old) maneuvered the course efficiently, picking up 123.58 penalties. Despite a broken piece of equipment on course which cost them 10 penalties, they hold a dominating lead.

“There’s a lot going on for my entire family and the crew here to produce this tournament of sport, but I try to jump on the carriage, clear my mind and do my best,” said Weber. “I was pleased today with the horses. They really performed well for me and I think they’re in a good way as [FEI World Equestrian Games™] approaches.”

“It’s a really fun, challenging course here. Lots of good questions are asked. I’ve been really fortunate with 10 years of experience with the ponies. The ponies weren’t little. They were big, so the transition to horses was not as difficult because it’s the same style of driving. That’s been really helpful,” said Stroud.

Adcox (Myakka City, Fla.) remains as the only competitor in the intermediate pair horse division as Doyle (Hillsborough, N.J.) elected to retire from competition due to an injury to one of his marathon specialist horses. He drove his KWPN geldings Nupafeed Auto Pilot (13 years old) and Pepe (six years old) in the marathon and finished with 105.07 penalties. He was impressed with his young horses’ willingness throughout the course.

“This is only the third time [Pepe’s] been out, so he’s kind of a little shell-shocked, but he handled it. He stepped up to the plate and did his job. That’s all you can ask for. He was startled at the first [water obstacle] hazard, and he decided he didn’t want to go in the water, so I didn’t push him and that paid off,” said Adcox. [Losing Shane] is disappointing because nobody wants to win by default. I want to win because I earned the win, not because somebody [is a horse down]. You never want to win that way if you can help it.”

Thompson (Lodi, Wis.) and her seven-year-old Funnominial C.G. carried their momentum from Friday’s dressage phase over to an excellent marathon phase to remain the intermediate single horse leaders. She and the Dutch Warmblood gelding drove a consistent, cautious marathon to end the day with 86.89 penalties.

“Coming into the [first] water [hazard] there were lots of people and tents, but it went very well for us and it was a good start. The conditioning really paid off in ‘The Gulch’ and he soared through the path. My navigator [Terry Shaw] and I were pleased with his performance,” said Thompson. “This is such a top venue and a world championship level course, so it tests you and questions teams a bit more.”

Taylor Bradish (Windsor, S.C.) and Katydid Duchess, owned by Katrina Becker, added 83.20 penalties for an overall score of 142.24 penalties to move from fourth to second place following two phases. This is the toughest atmosphere the nine-year-old Welsh Pony Cross mare has faced but handled the environment exceptionally well for a first-timer.

“[The marathon] was a lot to ask because she is fairly green. Coming into the first water hazard I was a little nervous, but when she saw the first gap she never second guessed me,” said Bradish, who is competing in her second Live Oak competition. “This year I [especially] I want to do well. I knew [my] horse could [complete the marathon], so I really pushed us. Live Oak is the best show in the country, and you want to do well.”

Whaley (Paris, Ky.), no stranger to Live Oak combined driving events, is using this opportunity to train her youngest Welsh Cob Pony Teddy (five years old), who competed in Friday’s dressage phase on behalf of the team with Tommy (14 years old). Not ready, for the challenges of a Live Oak marathon course, she hooked up Tommy and Tanner (11 years old) for marathon. Their experience propelled them to the lead, adding 78.53 penalties.

“My navigator [Colton] says this was our best [Live Oak marathon] round in years. The sixth [fountain] hazard was the most difficult, but we found the best route; Colton was exceptional,” said Whaley.

After a conservative dressage phase, Keeler and Zeppo exploded through the marathon course. They added 82.30 penalties and move into the lead by less than one penalty point. She is competing her six-year-old Hackney gelding in his first intermediate event and could not be more pleased with his development and heart.

“This is the toughest course in the country, and we didn’t know what to expect with him. However, everything drove according to plan, and his size played to his advantage,” said Keeler, who had the fastest time at hazard four, the Ariat maze. “To be competing for our first national championship with the pony that no one expected anything from, it’s pretty special, and none of this would be possible without [my navigator] David.”

“Her fitness and air intake was huge [for the marathon]. In the sixth [fountain hazard], she was a machine and stayed very true and honest, so I was super proud of her,” said Marshall.

Kristin Whittington (Edinburgh, Ind.) and Symphony dropped to third place overall with a score of 150.52 penalties. She and the eight-year-old Welsh Pony Cross mare added 93.08 penalties to their dressage score.