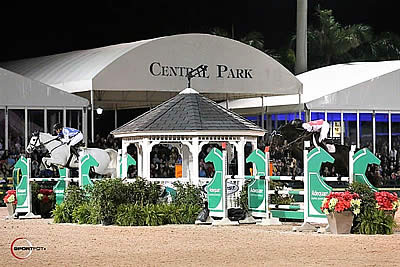 The final match race was close, but it was Spencer Smith who sealed the win for the men’s team over Maggie Jayne. Photo © Sportfot.

Wellington, FL – January 13, 2018 – On the opening “Saturday Night Lights” and in the 10th annual Battle of the Sexes, presented by Wellington Regional Medical Center, the men’s team was victorious for the first time in the history of the class. The event is one of the most popular events at the Winter Equestrian Festival (WEF), held at the Palm Beach International Equestrian Center (PBIEC) in Wellington, FL.

The contest was held in three phases, consisting of a faults converted speed round, a relay race, and a match race. The men and women were pitted against each other in each phase over courses set by Eric Hasbrouck (USA).

In round one, it was a tie with both teams scoring five points. Ireland’s Jordan Coyle had the fastest time of 49.21 seconds.

Out of 20 entries in the 1.50m Classic, five went clear over a course designed by Eric Hasbrouck (USA), and three of those were double clear. Taking the win in a time of 36.676 seconds was Todd Minikus (USA) on Carlo, a 2006 Holsteiner gelding by Casall x Landlord owned by North Face Farm.

Saturday’s third class of the day came to a close with Tina Allen, from New Canaan, CT, taking first place honors in both Osphos® Amateur Owner 3’3” 36 & Over jumping classes. Allen claimed the first blue aboard her 7-year-old Westphalian mount, Sinatra, and rode Galaxy, her 12-year-old partner of six years, to victory in the second round over fences.

“I’m thrilled about it,” said Allen. “I made a mistake on each horse in both classes, but I am very happy to come out on top.”

“This is my third show on him in the 3’3”,” said Allen. “I am ecstatic with him. He is so fun to ride and has a huge stride. He gives you confidence when you go in the ring even though he is so young.”