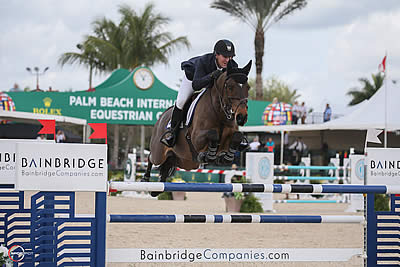 Ward and the 10-year-old Holsteiner gelding (Catoki x Cartello B) are a new partnership, but they have wasted no time getting to the winner’s circle. The duo topped a field of 59 over Kelvin Bywater’s (GBR) speed track by a nearly two-second margin over Mexico’s Santiago Lambre and his own Doloris. Ward stopped the clock in 57.54 seconds, while Lambre settled for second in 59.12 seconds.

“He’s naturally an incredibly fast horse, so in the speed classes you have a little bit of an advantage,” said Ward of the horse he owns with Marilla van Beuren and Bob Russell. “Santiago is a very fast rider, but this horse is, I think, the fastest horse I’ve ever ridden. I knew turning for home we were very fast, and if things come up basically as you want, he’s just naturally faster than most horses, so you don’t have to do anything extraordinary.”

Hunter competition in the Rost Ring continued on Friday with the crowning of Krista Weisman and Concept as the Adult Amateur Hunter Younger (Section A) champions. Weisman rode Concept to two first and two second-place finishes in the division.

Weisman, of Brooklyn, NY, was excited to get back into the show ring with Concept after recently having a baby. “We like to joke that he was on paternity leave over the summer and now this is his second show back in a year,” Weisman explained.

The pair had a successful return to the show ring and definitely stood out to the judges. “He has the most comfortable canter and feels like he is just floating along,” Weisman said.