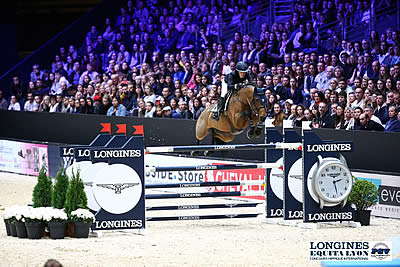 It was certainly no easy task to overcome the difficulties of the course designed by Gregory Bodo for this Grand Prix Longines FEI Jumping World Cup Lyon 2019. In particular, the two combinations – the triple at number 7 and the double vertical at number 9 – gave the 40 riders who had qualified for this class a hard time. Several top riders got caught out, such as Simon Delestre and Pénélope Leprevost, who made mistakes on the triple with Hermes Ryan and Vancouver from Lanlore, and the German rider Daniel Deusser, who had a 4-point penalty on the double.

In fact, just thirteen riders found the solution on the first round. The American Jessica Springsteen was the first to do a double clear round and set the bar high with a fast time of 41.85 (second overall). Everyone tried to go faster by taking risks in this high-speed jump-off, but only one rider managed to finish in front of the American, and not just anyone! Riding his faithful Clooney 51, the young Swiss rider Martin Fuchs made his mark in style with a time of 41”27. The world number two – who was silver medallist at the last World Championships, and became European champion this summer in Rotterdam -retained the title he won in the arena in Lyon in 2018. “This is such a great win. Clooney was in great form today. It was amazing. I was lucky going into the double verticals in the first round, when he touched the bars slightly, but then he was very obedient for the rest of the course. I was also lucky to be among the last riders to take to the arena in the jump-off. I had the chance to look at Jessica’s horse, which has the same kind of stride as Clooney, and I wanted to try and jump the course like her. On the last jump, I just tried to remove one stride and that’s how I won,” said Martin Fuchs. Now at the top of the Longines FEI Jumping World Cup ranking for Western Europe, the Swiss rider intends to continue on the circuit, but with other horses: “Clooney’s not going to do anymore World Cup stages. I just wanted to do one stage with him to make it to the finals. Normally, I would not have used him for this competition, because there are the Olympic Games next year. But I wanted the do the best stage with Clooney and so I chose Lyon. It was the right decision. I will do the stages in Stuttgart, Madrid, and London with other horses and then see who I take to the final.”

At the end of the class, the American Jessica Springsteen – who was second – said she was delighted with her horse, which she has been riding for almost a year and a half. “It took me almost six months to find my feet with her. She’s a very obedient horse. She was already great on Friday in the qualifying Grand Prix for the World Cup stage, so I am very happy with her. Being based in Europe and competing with the best in the world has really helped me to improve. But I must admit that the good results I’m having on the circuit are also due to the great complicity I have built with my horse. So, we’re doing just fine together.”

Third place went to the Belgian rider Peter Devos, who rode a quick jump-off, finishing within the same second in 41”95. “I was really happy with my horse today. She had a few weeks off and came back in good form. I looked at what Martin did and I know he’s always very fast. Same thing with Jessica. I had to be careful because my horse is not so easy to ride. When I go a little too fast, she can be a little hard to handle. So, I had to keep her calm and I did a good round with the right distances everywhere. There is just the line between the first two obstacles where I thought of removing a stride, but finally I decided against it because no one had tested that option.”

The last rider to set off in the jump-off was the Frenchman Julien Épaillard on Queeletta, and he put in a great performance. With a double clear round, the best-ranked French rider in the class took fifth place in this World Cup stage with a horse that he has only been riding since the beginning of the summer. “This is my first 5* Grand Prix with Queeletta so I’m really pleased; she jumped very well. I had a good weekend. I would have liked to be faster in the jump-off, but the others were better today and… I’ll be back,” he joked. Having already won the first round of the CSI 5* this weekend, this couple is certainly one to keep an eye on.

During the press conference, Grégory Bodo (the course designer) spoke about the layout of this Grand Prix for the 2019 Longines FEI Jumping World Cup stage in Lyon: “I watched the qualifying class at the Grand Prix on Friday evening, and I understood the approach I needed to adopt for today, despite the fairly large number of clear rounds. I wanted to make a very smooth course. It was quite long, but really with a horse’s mindset. Riders needed to gallop from beginning to end in the class. It should be noted that Lyon is one of the largest indoor arenas in the world, and I don’t think the horses were out of their comfort zone. Just as we wanted, the mistakes came from all over the course. I think there was a good first round and a good jump-off.”