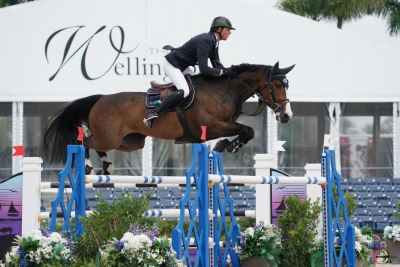 Wellington, FL – March 19, 2021 – Ben Maher (GBR) and Ginger-Blue, owned by Jane Forbes Clark, moved masterfully across the 1.50m course to win the $37,000 Adequan® WEF Challenge Cup Round 10 CSI3* on Friday, March 19, in the International Arena at the Palm Beach International Equestrian Center (PBIEC) in the tenth week of the 2021 Winter Equestrian Festival (WEF).

Course designer Michel Vaillancourt (CAN) challenged the competition with a technical 1.50m track that featured 16 jumping efforts. A starting field of 93 entries was narrowed down to just nine qualifying and seven electing to return for the jump-off. Maher led the way as the first to return in the subsequent round, setting the pace aboard the 10-year-old Dutch Warmblood mare by Plot Blue x Royal Bravour, with a clear effort in 39.66 seconds.

“I thought it was a big enough course for her,” said Maher of the mare’s double clear performance. “It’s tough here at WEF because the CSI3* weeks are very competitive, and the track is probably a lot bigger than a typical three-star grand prix qualifier. I think that proved it with only nine clears out of 93 horses, so it was clever course building and quite technical in the middle [of the course].

Competition in the International Arena at the Palm Beach International Equestrian Center kicked off Friday morning with the final competition for young five-, six-, and seven-year-old horses in the Developing Jumper Series (DJS) sponsored by Spy Coast Farm. The seven-year-old horses were the first to debut in the $20,000 DJS 7-Year-Old Classic where Alex Matz (USA) took the victory aboard the Vintage Sales entry, Jillz. Jillz was also presented with the Champion Equine Insurance Jumper Style Award presented by Laura Fetterman.

Matz and Jillz navigated both the first round and jump-off track fault-free and ultimately cleared the shortened effort the fastest by clocking in at 33.63 seconds. Matz has been partnered with the seven-year-old KWPN mare (Denzel VT Meulenhof x Cartina) since she was purchased at the VDL auction in Wellington, FL last season and has big plans for the bright young horse.

The six-year-old horses in the Developing Jumper Series classic were the next to take center stage in the International Arena. The top-placing 25 entries from the series returned to contest the track but Christian Coyle (IRL) ultimately piloted C&C Willow to the winning title. He expertly rode his young Irish Sport Horse mount (Emerald Van’t Ruytershof x Cortynan Loughahoe Girl) through double-clear rounds with a leading time of 35.00 seconds.

Coyle has had the young mare since she was a four-year-old after seeing her at the Northern Ireland Championships.

In the series finale of the Developing Jumper Series (DJS) sponsored by Spy Coast Farm, for five-year-old Developing Jumpers, Daniel Coyle (IRL) and Lovely Boy P, owned by Ariel Grange, produced a stellar double clear effort to take the blue ribbon. The new partnership is blossoming quickly as Friday’s win marked just the third time Coyle has ever ridden the five-year-old Dutch Warmblood gelding by Campbell VDL x Arezzo VDL. The pair finished in a tie for fourth place on Wednesday in the qualifier.

With eight horse-and-rider combinations qualifying to jump-off over a shortened track in Sunday’s final, Coyle piloted the talented youngster effortlessly around the course to finish in a time of 35.17 seconds, taking the win by nearly a full second.