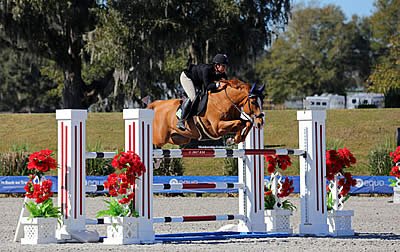 Ocala, FL (February 3, 2017): The HITS Ocala Winter Circuit is in full swing and Week III kicked off with the $5,000 Johnson Horse Transportation Open Welcome. Riders and horses turned out for a shot at scoring the first featured win of the week, but only one could lay claim to the victory.

The team to beat was Lisa Goldman riding Morocco. They would claim the win with a lightning-fast round by a full two seconds in a six-horse jump-off. The course was designed by Mark McGowan of Kilmarnock, Great Britain.

“Morocco is my tried and true ride, and he is incredibly fast across the ground,” said Goldman. “The course rode quick; I thought it was well designed and it was a nice course for a shorter, speedier horse, like ‘Cowboy’.”

Grand Prix titan Aaron Vale of Williston, Florida was first to return to the jump-off. He set the tone for the remaining field with a quick, clear round aboard Darling GR, owned by Troy Glaus. They stopped the clock at 37.892, a time that would hold up until Goldman entered four rounds later; they would ultimately go home with second place.

Milford, New Jersey equestrian, Morgan Ward, was next to test the abbreviated course. She and Diacord, owned by Daniel Bluman, powered through the course to finish in 39.385, ultimately settling them in third place.

Goldman was the fourth to test the jump-off, and she knew she’d have to put the pedal to the metal to overtake Vale’s quick time.

“Cowboy is naturally fast, but I have to keep things level-headed,” said Goldman. “We took 1, 2 and 3 quickly and shaved off a few strides in a few different places on the course to save time.”

They finished in a speedy 35.530 for the eventual win. None would surpass the time including fifth place finisher, Brandie Holloway riding Dublin, owned by Hays Investment Corp. They suffered an unfortunate rail at the second fence on course. The final contender in the jump-off was Debbie McCarthy Connor and Zim, owned by Connor & Ebetino Jumpers, LLC for sixth place.