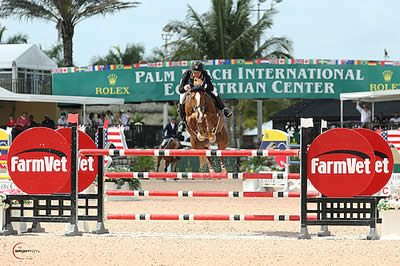 Wellington, FL – March 11, 2015 – The 2015 Winter Equestrian Festival (WEF) began its tenth week of competition at the Palm Beach International Equestrian Center (PBIEC) on Wednesday with a win for Lisa Goldman (USA) and Morocco in the $34,000 1.45m FEI speed class. In a field of 70 competitors, the pair led a blazing fast line-up of Irishmen in the top four, finishing ahead of Shane Sweetnam (2nd), Cian O’Connor (3rd) and Ronan McGuigan (4th).

Michel Vaillancourt (USA) is the course designer in the International Arena for week 10. Out of 70 starters, Vaillancourt saw 20 clear rounds over his 1.45m speed track. Goldman and Morocco were the winners in 63.70 seconds. The pair pushed Shane Sweetnam and Spy Coast Farm LLC’s Cyklon 1083 out of their early lead in 65.10 seconds. Cian O’Connor and Stall Gullik’s Zazou finished third in 65.12 seconds, and Ronan McGuigan and Capall Zidane completed the fourth best time of 67.29 seconds.

Goldman and the 12-year-old American-bred Oldenburg/Thoroughbred gelding (by Roc USA) have been partners since Morocco was four years old. The pair already earned an international win this season in week eight’s $10,000 Wellington Equestrian Realty CSIO Speed Stake. They proved themselves once again by beating some of the fastest horses and riders in Wednesday’s bunch.

“I didn’t watch Shane go, which is probably a good thing. Then you worry about going as fast as somebody else and where you can beat them,” Goldman remarked. “He (Morocco) is just so fast across the ground. He got last week off, so he really had a lot of energy today. He is just so incredible. He loves his job so much.”

A fiery character in and out of the ring, Morocco’s antics don’t bother Goldman. She explained that as soon as he is on course, he puts his game face on.

“There is a lot of compromise that happens with him. If he starts bucking and going sideways you almost have to let him do it because he gets worse if you try to stop him. Once he gets in the ring, he is all about his job,” she detailed. “Once I am going to that first jump, I never worry.”

“Sometimes he comes out like a western pleasure horse at home,” Goldman laughed. “He either comes out really slow and just bobs around, or he is crazy, but he is almost always crazy.”

“Morocco is one in a million,” Goldman stated. “He is probably my favorite. It is hard to say that over my other horse (Centurion B). I have my two boys and they are both so good, but this one is my pet. He is like a dog. You turn him out with one of those big balls and he plays all the time. He is so fun.”

Also showing on Wednesday, the $6,000 Spy Coast Farm 1.40m speed class was held in a California Split with wins for Hardin Towell (USA) and Jennifer Gates’ Emilie de Diamant A S in Section A and Mark Bluman (COL) aboard Stranksy’s Mission Farms’ Liverpool in Section B. The $6,000 Spy Coast Farm 1.40m jump-off class concluded the day with a win for Alison Robitaille and Hooves LLC’s Sensation 21.