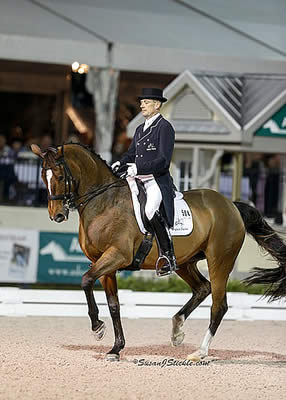 Wellington, FL — January 9, 2015 — Lars Petersen (DEN) and Mariett took home the win in the first “Friday Night Stars” event of the 2015 Adequan® Global Dressage Festival (AGDF) season. In the FEI Grand Prix Freestyle, presented by MTICA Farm, they scored an impressive 78.325% to secure the victory. Mikala Munter Gundersen (DEN) and My Lady followed in second receiving a 74.075% with Caroline Darcourt (SWE) riding Paridon Magi to finish third with a 72.700%.

Petersen and Mariett, veterans to the FEI Grand Prix Freestyle, displayed their impressive form, a clear indication of the duo’s long-standing partnership. “I think I said this last year, but it seems like she’s actually getting younger,” he said smiling. “She’s 17 and, knock-on-wood, still so fresh. I don’t work the tests with her very much; it’s more about keeping her fit. She still has a few more great years left in her.”

The pair was followed closely by fellow Danish rider Munter Gundersen and My Lady, who have also enjoyed a successful start to the 2015 season. “My Lady feels stronger and better than ever, for sure. I’ve spent the last four months since WEG working on strength and conditioning,” commented Munter Gundersen. “She’s a hot horse and needs to go out a lot. I have a good feeling that we will continue to improve throughout the season. I’m extremely happy with what we have accomplished this week already.”

Caroline Darcourt also had a great ride aboard Paridon Maji in their first test under the lights. Darcourt, who has worked closely with Tinne Vilhelmson-Silfven for nearly 12 years, was very pleased with the performance. “It was fantastic to ride in this ring under the lights. We’ve never done that before, and I’m happy he took it the way he did. It has been a great experience so far, especially to train. The facility is world-class,” she said.

The stands were full for the first FEI Grand Prix Freestyle class of the season, a testament to the growing popularity of the sport. Sponsor Janne Rumbough, owner of MTICA Farm and My Lady and also a competitor aboard her own Junior in tonight’s class, was thrilled with the turnout and the results. “It was wonderful to be here and be the book-end. I was the first, and Mikala was the last. I had an incredible time. I’ve been (in Wellington) a long time, and it continues to grow and grow. It’s just a lot of fun,” she stated.

All of the competitors shared their gratitude with title sponsor Adequan® and Allyn Mann, Director of Luitpold Animal Health, as the company’s continued sponsorship has helped to grow AGDF. “I’m very proud that we are able to support this wonderful discipline. I’m really falling in love with the dressage world,” commented Mann. “As a person, I am honored to be in their presence and our company is honored to do what we can to support their careers and this competition.”

Several awards were given throughout the night, highlighting the dedicated owners that continue make the sport possible. The “Best Horse Owner Award for Prix St. George”, presented by Jill Irving, was awarded to Michael Klimke (GER) for his outstanding first two days of performance aboard his own Freeliner 2. The duo took home the win in yesterday’s FEI Prix St. George class and also finished first in the FEI Intermediaire 1 class held earlier this morning. Irving will also present awards to owners with horses competing in the National divisions throughout the duration of AGDF.

Wellington Equestrian Realty’s Craig Martin and Courtney Varney also presented the “Best Horse Owner for FEI Grand Prix Freestyle” to Marcia Pepper, owner of Petersen’s mount, Mariett. Pepper’s dedication to ensuring the successful career of Mariett has been defined through the mare’s incredible success at the Grand Prix level for so many years.

Allyn Mann presented Lars Petersen and Mariett with the Adequan® Artistic High Score Award for their tremendous performance in the FEI Grand Prix Freestyle. “I was motivated to change my music as I had been using it for nearly three years. I felt like there was a need for something new. It is actually quite a lot of work to put something like that together, and I’m so lucky and thankful for my team,” said Petersen.

In the first week of FEI CDI classes held at the Adequan® Global Dressage Festival, 13 countries have been represented with 42 riders and 54 horses, truly impressive numbers for the beginning of the season with those numbers only expected to increase as the competition schedule continues forward.

Earlier in the day, Michael Klimke (GER) captured another win aboard Freeliner 2 in the FEI Intermediaire I class, presented by MTICA Farm, with a 72.053% followed by Megan Lane (CAN) aboard San D’Or receiving a 70.842% and Diane Creech (CAN) riding Robbie W to third with a 70.026%.