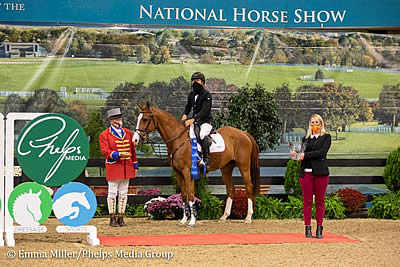 Lexington, Ky. – Oct. 29, 2020 – Show jumping took centerstage Thursday at the 137th National Horse Show as partnerships took to the Alltech Arena for the first day of jumper contests, with four classes offering opportunities to collect prize money. The evening’s highlight class, the Phelps Media Group $72,900 International Welcome Stake CSI4*, showcased the efforts of top-ranked international challengers hailing from seven nations, namely the United States, Israel, Ireland, Great Britain, Brazil, New Zealand, and Canada. Speeding to the head of the rankings as the most efficient duo of the skilled pack, Kent Farrington (USA) and Creedance, the horse he co-owns with Haity McNerney, added another accolade to their lengthy list, topping a 9-horse jump-off field to claim the lead spot in the victory gallop.

Earlier in the afternoon, the EquiJet $5,000 Junior Jumper’s swiftest trip came from Zayna Rizvi and North Run’s Quivive S Z. Turning in the quickest jump-off round ahead of a tight race, Julia Weiss and her own Dior topped the leaderboard in the $5,000 Amateur-Owner Jumpers to kick off their event on a high note.

Whittled down to representatives from Canada, the United States, and Ireland, the exhibitors in the tie-breaker round ultimately produced a mere four double-clear performances for the night’s highlight event. Proving why they are consistently ranked one of the top finishers in the world in upper-echelon competitions, Farrington and Creedance set the pace as the first partnership to leave all the rails in their cups for a second time, stopping the clock in 33.25 seconds. Though the seven subsequent teams tried to chase them down, none could catch the swift time set by Farrington and Creedance, solidifying them as the victors. Riding Page Tredennicks’s ever-speedy Carlchen W, Granato jumped to the runner-up spot in a fault-free 33.61 seconds, followed by Keenan and Chansonette Farm LLC’s Fasther in third position in 34.75 seconds to make for an all-American podium.

The day also saw 20 hopeful exhibitors navigate the 15-obstacle pattern of 1.40m fences set by Jorge for the EquiJet $5,000 Junior Jumper class. Following the first round of riding, seven partnerships returned to the Alltech Arena to vie over the abridged jump-off track. Rizvi posed the greatest threat of victory as the only rider with two mounts qualified for the tie-breaker round, and she saved the best for last, galloping Quivive S Z to a clear time of 31.050 seconds to capture the blue ribbon. Elli Yeager nabbed the reserve spot aboard her own Waliba VDL in 32.613 seconds with no faults, and Rizvi added to her success as she bookended the podium as the third and final double-clear rider on Peacock Ridge LLC’s Chaplin W in 35.525 seconds.

Similar to their junior counterparts, the amateur-owner exhibitors tackled the identical 1.40m course for their time in the limelight during the $5,000 Amateur-Owner Jumper class. Proving themselves as the clear victors as the only combination to leave all the fences intact, Weiss and Dior mastered the course in a clear time of 74.410 seconds, a lead that would hold as the only fault-free entry, negating the need for a jump-off. With 4 faults in 76.420 seconds, Joanna Wolffer captured second place with the reins on her own HH Earley, and Isabel Harbour earned the third-place honors riding IMH Equine LLC’s Reposado with 5 faults to their name.