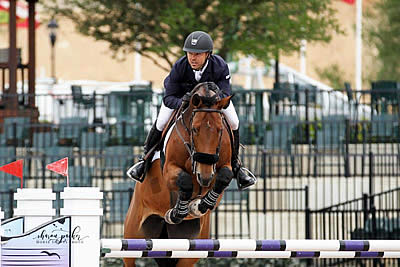 Mill Spring, NC – May 5, 2016 – In his first appearance at the Tryon International Equestrian Center (TIEC), Kent Farrington (USA) piloted Gazelle to a win in the $35,000 FEI 1.50m Suncast® Welcome, finishing the class in 43.76 seconds. Sharn Wordley (NZL) and Casper crossed through the timers in 47.387 seconds for second place, while Alise Oken (USA) and Hitchcock VD Broekkant collected third place with a time of 47.387 seconds. Major FEI competition continues at the venue with the $130,000 Asheville Regional Airport CSI 3* Grand Prix on Saturday, May 7, at 7:00 p.m.

Farrington, who currently sits in sixth on the FEI World Ranking list, took an efficient and educational approach to the track with Gazelle, capitalizing on opportunities to further the training of the 2006 Belgian Warmblood mare (Kashmir van Schuttershof x Diva ‘Ter Elsen’) as well as improve their communication throughout the course. Manuel Esparza (MEX) designed Thursday’s course in the George Morris Arena, which saw ten combinations move forward to the jump-off round, while six pairs secured a double clear effort on the afternoon.

“Manuel Esparza is an experienced designer and I’ve jumped his courses before in Calgary. They’re always designed very well. I think it was a great class measuring this for the welcome today,” commented Farrington.

Gazelle’s scope and carefulness helped the pair around the short course, in which they finished nearly four seconds faster than second place finisher Wordley. Farrington has carefully built up the mare’s confidence and focused on sharpening her turning ability in the ring.

“This is actually a horse that I showed in a few grand prix classes throughout this season and in the jump-off her turning is a little bit of her weakness,” he explained. “I think we’ve given up some good classes, so we’re focusing on making her training better through those turns. My goal for the jump-off was to really work on her weaknesses and work on my short turns to the jumps.”

As one of the younger horses in Farrington’s internationally renowned string, Gazelle has gained valuable experience this past season, contesting several of the major grand prix classes at the Winter Equestrian Festival (WEF) at Palm Beach International Equestrian Center (PBIEC), including a win in the $86,000 Suncast® 1.50m Jumper Classic in late March.

“She had a good circuit this past winter and we’re still fine tuning some of her training,” he noted. “When we finish here, she’ll go to Calgary to do some of the larger classes there.”

Thursday’s win marked Farrington’s first competition experience at TIEC and he was pleasantly surprised with the vastness of the facility, as well as the major investment the Tryon Equestrian Partners have made to expand the reach of equestrian sport.

“I’ve never been here before and you can see that they’ve put a lot of money into the facility, which caught me by surprise, just that everything is new. It’s very clear that there was a major effort here and a lot of funds have been put behind this facility to support it. It’s very impressive,” said Farrington.