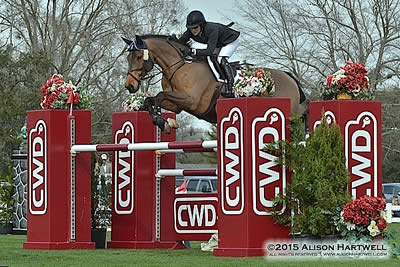 Brooke Kemper pilots Classified over the CWD oxer on their way to the win in yesterday’s $35,000 CWD Grand Prix.

Brooke Kemper of Culpeper, Virginia and her own Classified won yesterday’s $35,000 CWD Grand Prix, presented by Nutrena, on the world class turf grand prix field before delighted crowds at the Harrison County Equestrian Center and Fairgrounds in Gulfport, Mississippi.

Designing the course was world renowned Leopoldo Palacios of Caracas, Venezuela. Palacios is one of the most highly respected course designers in the world of showjumping as well as a course director of FEI, a co-founder of the Aachen School of Equestrian Arts and produces master plans for equestrian venues. He has been involved with show jumping and the equestrian sport as a whole to the Olympic level and has held the position of Second Vice President of the FEI.

“The grass turf field here is fantastic,” commented Palacios. “It’s big and really nice. I had a super time designing for everyone,” he said.

“These types of rings are great for the jumpers,” said Palacios. “The horses jumped really well so I designed according to the specs and I knew these horses and riders could handle it,” he added.

Six returned for the jump off and Andy Kocher of Lake St. Louis, Missouri was first to go with Michael Rosenberg’s Crown Joker. Although the pair went clean in their first round in a time of 83.439 seconds, eight jump faults in a time of 57.311 seconds would see them finish in sixth place overall.

Kyle Timm of Apex, North Carolina and Apex Equestrian Center’s Calida 55 followed Kocher in the jump off. Timm and Calida 55 finished clean in a time of 45.344 seconds and set the new time to beat.

Kocher returned, this time in the irons of Emanuel Andrade’s Tiny Tim. Four jump faults in a time of 47.655 would see them finish in fifth place overall.

Holly Shepherd of Grand Bay, Alabama and Loretta Patterson’s Triompf followed and turned in a clean round in 48.187 seconds which would see them finish in fourth place overall.

Timm returned to the arena, this time aboard Apex Equestrian Center’s Platinum. Timm finished clean in a time of 46.790 seconds, which put him in first and second place with one left to go.

Brooke Kemper of Culpeper, Virginia was last to go in the irons of her own Classified. While Classified and Kemper won the opening week’s $5,000 Horseflight Open Welcome, according to Kemper, prior to that Classified had not shown since November.

The crowds of spectators had all eyes on Kemper and Classified as she entered the competition arena. Kemper put the gas on and turned in a lightning fast, clean round complete with hairpin turns in a time of 44.213 seconds and took the lead. Timm finished with second and third places on Calida 55 and Platinum, respectively.

“I felt like I was really fast,” commented Kemper “I turned back really fast, and I was fast across the ground,” she said.

Course designer Leopoldo Palacios commented, “She made those turns really tight. The other guy [Timm] who finished second and third was a very good rider. I believe she knew that she had to take those turns to get the win. This was a very nice competition,” he said.

Kemper commented, “I thought Leopoldo designed a really nice course. Obviously I am going to say that I liked it because I won,” she laughed. “No one came out of the ring saying that was a bad course,” she continued. “It was very fair; all of the horses jumped around; no horse struggled,” she said.

“It’s a real advantage for me to be able to show on the grass turf field in the Welcomes each week,” said Kemper. “I know how it rides and feels which really helps me improve each week in the grand prix,” she added.

“I wanted to add that I really enjoy coming to these Classic shows. It is so nice to see the community come out to watch and see crowds in the stands and we really get into it when we have that sort of audience,” she said. “And, the livestream is great,” she continued. “My customers who aren’t here can watch from home.”

Kemper has owned Classified, a.k.a. ‘Chandler’ since he was four. “He is a bit of a pet,” said Kemper. “He loves to eat anything and everything all of the time,” she laughed.