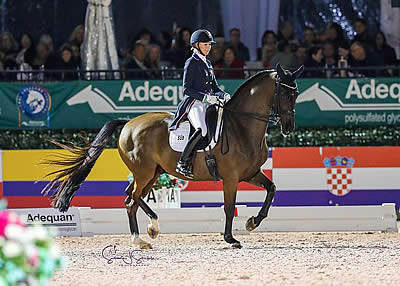 Wellington, FL – February 21, 2020 – Katherine Bateson Chandler (USA) made it two wins from two starts in week seven of the 2020 Adequan® Global Dressage Festival (AGDF) at the Palm Beach International Equestrian Center (PBIEC) in Wellington, Florida. Last to go on a blustery and unseasonably cold night under lights, Bateson Chandler and her faithful partner Alcazar won the FEI Grand Prix Freestyle CDI5*, presented by CaptiveOne Advisors, putting 76.105% on the board.

The Dominican Republic’s Yvonne Losos De Muñiz danced her way to a 75.115% second place riding her bouncy bay mare Aquamarijn, a 15-year-old by United. Juan Matute Guimon (ESP) improved one place from his finish in the qualifying grand prix to round out the podium aboard his father Juan Matute Sr’s Don Diego to 72.76%, despite a challenging ride in the windy conditions.

Bateson Chandler was a groom for Robert Dover for 16 years and is now aiming to catch the eye of selectors for a place on the USA team for the Tokyo Olympics with Jane Forbes Clark’s Contango gelding. She said: “Yesterday, I don’t think I’ve ever been that hot before, and today I don’t think I’ve ever come out of a test still being cold. We had the most extreme differences. I’ve ridden in very cold weather, and I’ve ridden in very hot weather, but not usually in the same show. So for the horses, it was challenging.

“I’m really happy because two or three years ago, my horse used to have a real issue with anything that moved – he’s a little bit of a spook that way. He went in there and didn’t look at anything and won the class,” added Bateson Chandler, who rode to a Tom Hunt compilation with a high degree of difficulty.

“Tonight was the first time that I’ve actually done my floorplan to my music correctly and not been behind or ahead. I do a double pirouette and then a one-and-a-half pirouette. In Olympia, I did a double and then a double, and then I was facing the wrong way, so I’ve had some issues with that.”

Bateson Chandler travels to the UK to train with Carl Hester every summer, and with his help she continues to get the best out of 15-year-old ‘Lonsie’, who has been competing at international grand prix for half a decade and survived a colic operation in the summer of 2016 while in Germany. They are now unbeaten in their last four starts.