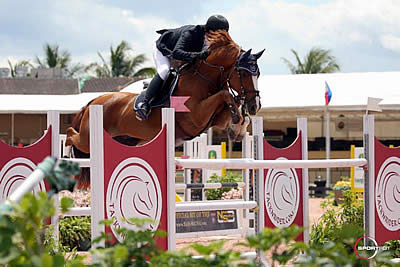 Wellington, FL – April 11, 2017 – Jose Roberto Reynoso of Wellington, FL and Azrael W took top honors in the $35,000 Nutrena® Grand Prix at ESP Spring I, hosted at Palm Beach International Equestrian Center (PBIEC) to kick off the post Winter Equestrian Festival (WEF) season circuit. The duo completed the jump-off track in 35.263 seconds to take first place ahead of Margie Engle of Wellington, FL and Dicas, who crossed the timers in 36.579 seconds. Ailish Cunniffe of South Salem, NY and Baloucento 2 rode to third place, finishing just behind Engle with a time of 36.838 seconds.

Reynoso and Azrael W, a 2005 Dutch Warmblood (Chin Chin x Voltaire) owned by Reynoso, rose to the top of the leaderboard after besting a nine-horse jump-off. Five pairs finished the day securing a double clear effort around both tracks. The pair finished a banner week of competition, after finishing in second place in the $25,000 Progressive Nutrition Grand Prix on Friday, just behind Laura Kraut and Deauville S, before their grand prix win.

“I thought the course was good. He was just amazing, like always. I really like this horse so much. I’ve had him since he was four and we have a very good partnership together,” said Reynoso.

The pair was the last to head into the International Ring during the jump-off for the class and Reynoso understood the challenge ahead. While several other riders had rails, he wanted to keep Azrael W careful, but also quick to ensure that the pair finished with the fastest time.

“I was the last one in the jump-off and I knew that there were both four fault rounds and rounds with zero faults. I wanted to be careful not to have a rail and make sure that he stayed quick so that we could finish well,” he added.

The duo will contest the ESP Spring II classes before heading back to Brazil for their summer and fall seasons, with hopes of returning to Wellington for the 2018 Winter Equestrian Festival and ESP Spring Series. He concluded, “We’re going to jump Spring II and then we’ll go back to Brazil, but are already planning on coming back for the 2018 season in November.”

Kraut and Deauville S bested the 33-horse class, which featured a small but fast jump-off of five horse and rider combinations. The seasoned pair of Kraut and Deauville S have competed around the globe and finished with one of their top placings this season in the grand prix.

Jimmy Torano of Wellington, FL and Day Dream, a 2008 Dutch Warmblood gelding (Zento x Heartbreaker) owned by Jimmy & Danielle Torano, rode to victory in the $10,000 Nutrena® Open Stake to start off major prize money classes at ESP Spring I. The duo narrowly edged Sharn Wordley of Citra, FL and Caiman Des Sequoias, who stopped the timers in 37.69 seconds, while Emanuel Andrade of Wellington, FL piloted Boy IV to third place, finishing just a tenth of a second behind Wordley in 37.773 seconds.

A total of 41 combinations contested the track, while seven combinations advanced to the jump-off round, including another two of Andrade’s mounts, Belita and Walter 61. Wordley also guided Rye Val de Mai to the jump-off as his second mount to contest the short course.

The $5,000 Omega Alpha 1.35m Stake was championed by Luiz Francisco de Azevedo of Belgium and his own Axel P, rode to an efficient trip around the short course, finishing in 36.29 seconds. Emanuel Andrade of Wellington, FL and his own Tupac Van De captured second place with a jump-off time of 36.362 seconds. Andrade also picked up third place in the class, piloting his own Jenni’s Chance to a top three finish with a time of 36.599 seconds.

Kelly Bauernschmidt of Bratenahl, OH and her own Belle Blue S rode to victory in the $1,500 NAL Child/Adult Jumper Classic after completing their jump-off trip in 37.376 seconds ahead of Nyah Chernoff of Dewinton, Alberta and Pater Noster, owned by Windemere Stables LTD., who took second with a time of 40.87 seconds. Serena Marron of New York, NY and Abnormaal, owned by Kevin Babington, earned third place after adding four faults to their jump-off time of 41.727 seconds.

Kendra Gierkink of Harpswell, ME and Freestyler, owned by Kadley Holdings LLC, captured first place honors in the $2,500 Gold Coast Feed Low Junior/Amateur Owner Jumper Classic, finishing the class as the only pair to secure a double clear effort. Phoebe Alwine of Delray Beach, FL and Zenith Dance, owned by In The Clover Equestrian, earned second place after dropping a single rail, adding four faults to their time of 40.854 seconds. Michelle Navarro-Grau of Wellington, FL and her own Tibetano finished in third place, after accumulating four faults and crossing through the short course timers in 45.39 seconds.

Heather Kuhl of Miami, FL and her own Wasserman rose to the top of the class in the $1,500 Equine Couture/TuffRider Low Children’s Adult Classic after besting the four horse jump-off with the fastest four fault time. The pair finished in 38.665 seconds ahead of Matti Fisher of Westport, CT and Paloma, owned by Lionshare Farm, who lowered a single rail and finished in 42.042 seconds. Sydney Gorall of Wellington, FL and her own Askano, took home third place after completing the jump-off track in 44.851 seconds.

Michelle Stacy of Marstons Mills, MA and her own Enqrique VHV took top honors in the $1,500 Marshall & Sterling Adult Jumper Classic after completing the short course in 35.237 seconds. Adrian Jay of Knoxville, TN and Bibi Sijgje, owned by Halle Fogel, placed in second after finishing the jump-off in 33.664 seconds and adding four faults to their score. Lia Screnci of Boca Raton, FL and Vichy, owned by Volado Farms, took third after dropping a single rail in the first round and finishing with a time of 72.494 seconds.

Victoria Colvin of Loxahatchee, FL and Gabriel, owned by J T Farm, took top honors in the $5,000 USHJA National Hunter Derby during ESP Spring I with a total two round score of 177. Ericka Koscinski of Center Moriches, NY and Emerson Hill, owned by Libby Mewbourne, rode to second place with a final score of 172. Zayna Rizvi of Greenwich, CT and Verdana, owned by Laura Wasserman, finished in third place, only a point behind Koscinski, completing two rounds with a total of 171.

Colvin and Gabriel received an 88 from the panel in round one before securing an 89 in the handy to take the win. The duo’s scores were the highest in both rounds, as they outpaced a class of 14 entries.

The Neue Schule Bits USHJA Hunter 3′ Division saw Richard Fancher of Crestwood, KY and Von Dutch, owed by Cara Cheska, take the division championship ahead of Deborah Perkins of Wellington, FL and her own Rise and Shine, who secured reserve champion honors.

Coco Fath of Fairfield, CT and Akinda, owned by Hillside Farm, LLC, secured the divisional championship in the #1 Education Place Junior Hunter 3’6″ Division, while Taylor St Jacques of Glen Allen, VA and her own Di Samorano were awarded with reserve champion.

For more information on PBIEC and to see a full list of results from ESP Spring I, please visit www.pbiec.com.