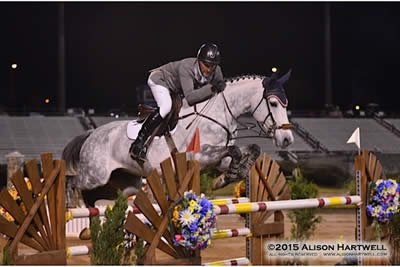 David Jennings of Franklin, Tennessee was the first to go in the irons of Masie Mcswain and Full Circle Farm’s Blue Moon 22. Although the pair beat the time allowed of 83 seconds with their time of 80.384 seconds, a rail at the triple combination would cost them four faults and they finished in fourth place overall.

Nobody was able to turn in a clean first round effort until Haley Gassel of Lenoir City, Tennessee, Jennings’s student and winner of last week’s $35,000 Classic Grand Prix, presented by EMO, and her own Quite Dark 2 turned in the first clear round in a time of 80.487 seconds.

Gassel sat in the lead until her mentor, Jennings, returned to the Olympic Arena, this time in the irons of KM Farms’ KM Corfina. The pair turned in the second clear round in the prix in a time of 76.548 seconds and to the delight of the crowd, ensured there would be a jump off round!

None of the riders following Jennings in the jump order turned in clear rounds and the stage was set for the teacher versus student jump off round.

“Michel set a very technical course,” commented Jennings. “I have ridden many of Michel’s courses and have found they are built according to who is in the class,” he added. “While the course wasn’t too big, it was a tough, technical ride,” he said.

Vaillancourt set the jump off round with a time allowed of 48 seconds. Gassel and Quite Dark 2 were first to go, turning in a clear round and setting the time to beat at 37.094 seconds. But her mentor Jennings and KM Corfina followed and posted a fault-free round in a time of 36.912 seconds, securing the win.

“It is really rewarding to ride against one of my students,” commented Jennings. “Haley has worked her way up the ranks and has been progressing really well,” he added. “When I ride against anyone, including my students, I do my best,” he said. “I ride to win and hopefully my students can see what I am doing so they can emulate that in their future rides,” he said.

KM Corfina is an 8 year old mare Jennings and KM Farm imported last January. “This is her second grand prix and her second win,” said Jennings. “She is progressing nicely and looks to be a great amateur or grand prix horse,” he said. “She is one of our sale horses and we expect great things from her this winter,” he added.

Final placings for the $35,000 Classic Grand Prix awarded third place honors to the fastest four-fault round, turned in by Michael Tokaruk of Germantown, Tennessee and A Propos, owned by Ilan Ferder, in a time of 72.741 seconds. Fourth place went to Jennings in the irons of Blue Moon 22, and fifth was awarded to Kelly Arani of Dover, Massachusetts and Marigot Bay Farm, LLC’s Artani, 2 who turned in a first round time in 83.585 seconds with four jump faults and one time fault.

The Atlanta Fall Classic is wrapping up the competition today at the Georgia International Horse Park, home to the 1996 Olympics. More than $300,000 in prize money is offered over the two AA weeks and riders have the opportunity to compete in the Olympic arena and participate in the Zone 4 Finals, the $25,000 Barry Lane Memorial Jumper Classics, EMO Equitation Finals and the National Classic Equitation Finals. The facility recently installed new footing in all of the arenas and with more than 300,000 in prize money offered, world-class stabling and arenas, top show management staff and a division for everyone in your barn, there is no better place to be in November. From the jumper ring to the short stirrup arena, each competition ring is highly decorated and staffed with top-notch, friendly professional show staff.