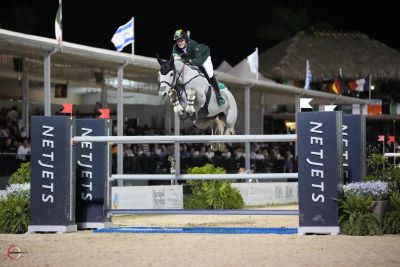 Wellington, FL – Eleven nations brought forth teams to compete in the $150,000 Nations Cup CSIO4*, presented by Premier Equestrian, the highlight event of the eighth week of the 2022 Winter Equestrian Festival (WEF) in Wellington, FL. The flag for Ireland was raised at the end of the night as the team, consisting of Andrew Bourns, Cian O’Connor, Eoin McMahon, and Max Wachman, led by Chef d’Equipe Michael Blake, won the fourth Nations Cup for Ireland in the 21-year history of the class at WEF.

Teams from Argentina, Australia, Belgium, Brazil, Canada, Great Britain, Ireland, Israel, Mexico, the United States, and Venezuela competed in Round One, and the top eight returned for Round Two under the lights in the International Arena.

Heading into Round Two, Ireland was tied with Canada at zero faults after three clear rounds from McMahon and Beerbaum Stables’s Chakra 9, Wachman and Berlux Z, owned by Coolmore Show Jumping, and Bourns on Sea TopBlue, owned by QBS Equestrian LLC. With three clear rounds, O’Connor did not have to compete with Cerruti Van Ter Hulst Z, owned by Ronnoco Jump Ltd.

Just one rail behind and tied for second were Great Britain, Australia, and Mexico. Belgium and the USA sat on eight faults, while Argentina had 10 faults. There were 16 clear trips in the first round over the course designed by Nick Granat (USA) and Steve Stephens (USA).

Fortunes changed dramatically in the second round as more rails fell, but with solid performances from the Irish team, they came away with the win.

Forty-three horse-and-rider pairs tackled a course of 16 obstacles on Saturday in the $50,000 CaptiveOne Advisors 1.50m National Grand Prix which took place in the International Arena. The course was set with an allowed time of 76 seconds over a challenging track which included a triple combination.

First in the ring was Francis Derwin (IRL) who would go clear aboard Vlock Show Stables LLC’s Ricore Courcelle. The pair would ultimately come in third after being only one of 13 to post no faults in the first round. In the jump-off, they recorded a time of 34.292 seconds as one of five double clears.

Riding second to last in the jump-off, Karl Cook (USA) and Ircos IV, a 14-year-old Belgian Warmblood gelding owned by Helen Signe Ostby. Cook and Ircos IV finished their jump-off round in a time of 33.234 seconds, edging out second-place rider Shane Sweetnam (IRL) with Indra Van De Oude Heihoef, owned by The Blue Buckle Group, who clocked in at 33.339 seconds.