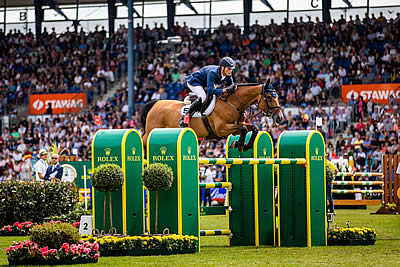 It was all smiles for the home crowd at CHIO Aachen as Germany’s Daniel Deusser was crowned winner of the RWE Prize of North Rhine-Westphalia aboard his bay mare Killer Queen VDM. The course set by Frank Rothenberger asked tough questions for the 42 starters in the first round with just 11 reaching the jump-off to battle it out for the top spot. Early clear rounds put the pressure on the later starters with the leader board changing frequently as the competition remained wide open. Belgium’s Olivier Philippaerts rode a speedy clear in the time of 45.79 seconds but Deusser produced a thrilling display of skill to shave over a second off Philippaerts time (44.65 seconds) and much to the delight of the patriotic spectators held the lead to take the victory.

What’s it like to win in front of such a big home crowd?

It’s always such a special feeling to win here at Aachen. When the home crowd gets behind you, you can really feel them, and the atmosphere is incredible. You always want to perform well, you always want to jump clear, but when 40,000 people are behind you and cheering you on, it creates the most incredible atmosphere and it does influence your riding.

Is Killer Queen VDM a star for the future?

Absolutely; I really think this horse can compete at the highest level. I said last year that I thought she was a horse with lots of potential and I am really happy with her performance today.

The water jump seemed to cause a few problems; what were your thoughts on it?

It is very difficult to explain; it is the same water jump we jumped yesterday but in the other direction. Even my horse who is normally very good over the water jumped it much higher today than she usually would. It is hard to say, perhaps because of the grass, as maybe we spend more time in sand arenas. The water jump itself was not too big or hard, but for some reason the horses jumped it worse today than yesterday. Also, I saw a few horses jump it badly, which then gave me some mixed feelings on how I should jump it, and maybe meant we didn’t ride with the same confidence and enthusiasm that we would normally.

You have qualified for the Rolex Grand Prix on three horses; which one will you ride on Sunday?

I will be riding Tobago Z on Sunday.