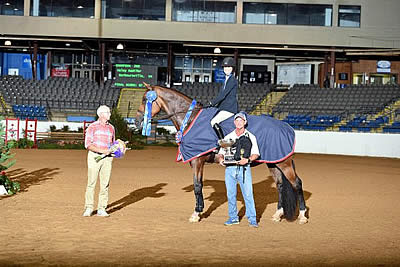 Lexington, Va. – August 30, 2016 – After four days of elite competition at the picturesque Virginia Horse Center, Haley Redifor rode away with the tricolor ribbon and victory in the 2016 Virginia Horse Show Association (VHSA)/EMO Medal Finals aboard her new mount, Ballon. The Lexington National Horse Show hosted top athletes and trainers from across the country, wrapping up competition on August 14.

The 16-year-old and her 9-year-old Dutch Warmblood have been working together since March. The pair has qualified for the Pessoa/USEF Hunter Seat Medal at the Pennsylvania National Horse Show and hope to qualify for the ASPCA Maclay Finals at the National Horse Show, as well.

“Ballon is extremely easy,” Redifor said. “He may be the easiest horse I’ve ever ridden. He just loves to do his job. He was perfect all weekend. He was perfect from the second I got him. We clicked immediately. You pretty much just show him where to go, and he’s going to do it. He loves what he does and he’ll do it without question.”

Redifor capped off a hat trick with the Medal Final victory at the end of the week, after also earning wins in the Virginia Hunter Championships Pony and Junior-Amateur Finals on Tuesday, August 9.

“The wins meant everything to me,” Redifor expressed. “I have so much support from friends and family. I was so nervous, because I didn’t want to let anyone down and I wanted to do well. I am so happy that I was able to go in there and lay down rounds that my trainers (Chris Wynne and Glenn Moody) would be proud of. I am really happy.”

She added, “I love the VHC facility. It’s one of my favorites. There are so many places to ride around. The Dover Saddlery sponsored trail ride is so much fun. You can take the horses on the trails and find tokens for a chance to win prizes.”

Kesli Okun had a perfect ending to her junior riding career, earning the blue ribbon in the VHSA Horsemanship Championship during the Lexington National Horse Show with Monopoly.

“Lexington National and all the spring series are some of my favorite shows,” Okun shared. “The management is like family. We’ve been showing there for so long, and I’ve watched this final every year. To come home and finish like is just huge for me.”

Sophia Vella, a sophomore at Virginia Tech, competed at the premier event as a catch-ride trainee for Gordon Reistrup. The 19-year-old rode Steel Me Away, an 8-year-old Thoroughbred owned by Jennifer Oliver. Together, the rider-and-horse duo surpassed their own expectations and were crowned the 2016 Adult Medal Finals Champion.

“This show was our third show together,” Vella explained. “The medal final was my second time doing equitation on Steel Me Away. It was thrilling to win, because I went in with the mindset, ‘We’ll see how it goes and be happy with whatever happens.’ He was just really rideable and consistent the entire weekend.”

Commenting on her blue-ribbon weekend, Reistrup added, “Sophia was truly delightful, and I give all the credit to Sue Homan, who trained her throughout her entire young life. Sophia was super receptive and had an amazing horse show. She’s a super rider.”

Vella was not the only athlete benefitting from Reistrup’s training throughout the weekend.

“Lizzie rode beautifully all week,” Reistrup said as he fought back emotions. “She scored a personal best of 90 in the first round in the AYR Equitation challenge. That class was started in memory of my late wife. It requires the riders to walk the course themselves and don’t get any trainer input. It’s a real test of horsemanship. This win and this year was extra special. My wife passed away 10 years ago. It’s a great way to carry on her legacy. I couldn’t do anything, but watch Lizzie from the stands. I wished her good luck before she headed down to the arena. It was quite special. She rode beautifully, and the horse went beautifully. ”

Bailey and Acido 7 had a stand-out weekend, placing within the top eight of each class they entered. The 17-year-old has owned and trained the 17.2 hh Oldenburg for three years under Reistrup’s direction.

“Acido 7 is great, because he has a classic style,” Bailey explained. “He can do the hunters, but also the jumper-style equitation classes and has a big enough stride to make it under the time allowed. I think he just has a nice look and jumps a good jump, which adds to the picture. We’ve come a long way since we were first paired. It’s been fun growing together. My riding and his strength and ability have grown over the years.”

Earlier in the week, the Lexington National Horse Show hosted the USHJA National Hunter Derby, where Jason Berry captured the victory aboard IAmWhatIAm. The professional rode on behalf of Dawn Maxon and earned the blue ribbon finish during the prestigious event.

“The horse performed great and won both rounds,” Berry said. “It was a big class, and was really competitive. I definitely tried to be as handy as possible in the handy round, making the sharpest turns I could. He was excellent and was right there with me the whole time.”

Berry continued, “IAmWhatIAm really wraps around the jumps. He’s scopey and jumps high and round. The higher the jump, the better he jumps. The win meant a lot to the owner. She’s from California and has had the horse for a long time, since he was a 2-year-old and brought it along herself. It’s great to have an owner that stands behind their horse.”

Berry is a local at Virginia Horse Center, who has earned his fair share of victories. Sharing his thoughts, he said, “It’s a great facility. It’s like home, and I love showing there.”

To learn more about other upcoming horse shows and events at the Virginia Horse Center, visit www.horsecenter.org.