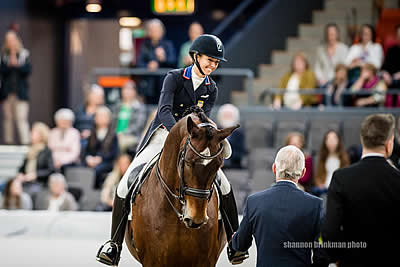 With poise and grace, the U.S. dressage combinations trotted down centerline on Friday ready to represent American dressage. Their hard work and dedication paid off, resulting in all three combinations placing in the top eight in the FEI Dressage World Cup™ Final Grand Prix. Laura Graves and Verdades led the way for the U.S., placing second on 80.109% closely behind Germany’s Isabel Werth.

Graves (Geneva, Fla.) and her own and Curt Maes’s 17-year-old Dutch Warmblood gelding found their rhythm in the large Scandinavium Arena in front of a knowledgeable Swedish audience.

“I thought [feeling super]. He was super rideable today,” said Graves. “I think tomorrow will be an interesting competition for everyone, and, hopefully, my horse gives me the same great feeling that he did today… I feel really, really confident in how we have prepared him for this competition.”

Madden Moves Up, Tied for Fourth after Round II of Longines FEI Jumping World Cup Final

With ground to cover, the U.S. combinations headed into Friday evening’s Longines FEI Jumping World Cup™ Final II looking to improve their positions in the second round of the Longines FEI Jumping World Cup Final. Round II saw a shift in the leaderboard, and Madden and Breitling LS jumped a commanding and nearly flawless round to place fifth in the class and fourth overall.

After jumping a clear round on a time of 76.41 seconds, Madden (Cazenovia, N.Y.) and Abigail Wexner’s 13-year-old Dutch Warmblood stallion headed into the jump-off with seven other top combinations. Their jump-off time of 34.75 seconds was the fastest of the round but a rail at the final jump cost them the double-clear. Sitting on just three penalties, and tied for fourth with Belgium’s Niels Bruynseels and Olivier Philippaerts, as well as Switzerland’s Martin Fuchs, Madden and Breitling LS sit less than one rail from the current leader headed into Sunday’s final.