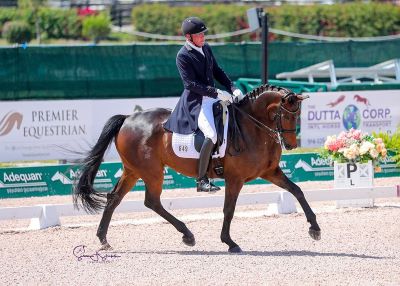 Wellington, FL – March 18, 2021 – It was the second day of competition for the FEI Stillpoint Farm Nations Cup™ CDIO3* at the Adequan® Global Dressage Festival (AGDF), and the team from Germany took home their first ever gold medal at the Wellington Nations Cup with 448.568% on Thursday, March 18. A hairsbreadth behind for the silver medal was the team from the United States, who earned 448.381%. Canada was awarded the bronze medal with 437.071%.

First in the ring for the Germans was Michael Klimke piloting Domino 957, Uwe Kappel’s 2012 Westphalian mare by Den Haag, to a score of 68.000% in the FEI Intermediaire I CDIO3*, which ultimately became the drop score for the team.

“First I want to say thank you to the organizers,” said Klimke. “It’s a very difficult time with the pandemic and the outbreaks, and the show has gone on perfectly organized. We all come from Germany and there is [no competition] going on there, so a big thanks from the German riders, the German team, and the German federation to the organizers. We are very, very happy to be sitting here.”

Klimke, who was also serving as the team’s Chef d’Equipe, noted the strength of the other three riders he was leading. “We have three top riders here. My mare was a little tired but the other three did a super, super job, and it was so close and we are more than happy that Germany won. Christoph and I have been here for eight years, and Germany has never won. Normally the Germans are only winning in Germany, so it makes us more happy and more proud.”

Kevin Kohmann rode Equitas LLC’s 2010 KWPN stallion by Amazing Star, Five Star, to two solid finishes in the Nations Cup classes on Wednesday and Thursday, concluding the FEI Intermediaire I CDIO3*, presented by Stillpoint Farm with a score of 74.206%.

“I’m super proud to represent Germany once again,” he explained. “Five Star just hasn’t let me down all season. Yesterday was his high score in the Prix St. Georges, so it felt especially good to do that with the team here with me. Super proud, super happy.”