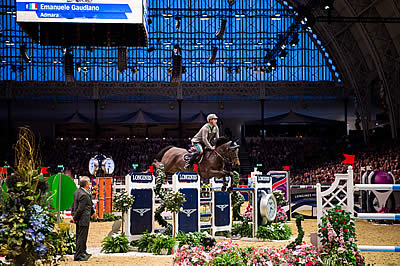 Emanuele Gaudiano and Admara produced a devastating turn of speed in the jump-off to win the seventh leg of the Longines FEI World Cup™ Jumping 2015/2016 Western European League at Olympia. (FEI/Jon Stroud)

Olympia, London (GBR), 20 December 2015 – The Christmas show at the Grand Hall in Olympia is always something special, and the seventh leg of the Longines FEI World Cup™ Jumping 2015/2016 Western European League more than lived up to expectations today when Italy’s Emanuele Gaudiano produced a sensational victory at the London (GBR) venue.

In a 17-way jump-off, the 29-year-old rider and his plucky 10-year-old gelding simply blew the rest away with a fearless gallop when eleventh to go against the clock. A top-class list of home contenders were obliged to line up behind him, with Ben Maher coming closest to take runner-up spot with Diva ll ahead of Michael Whitaker and Viking in third, world no. 1 Scott Brash and Hello M’Lady in fourth and Guy Williams and Titus in fifth place.

A total of 36 horse-and-rider combinations from 14 nations took part, and Bernardo Costa Cabral set them a 13-fence track that Brash described as “twisty and turny”. The narrow confines of the Olympia ring always presents quite a course-building challenge, and the Portuguese course designer described his creation as “not one of the tallest tracks, but technical enough – it walked tougher than it rode.” That was borne out when five of the first seven starters jumped clear, but the double of oxer to vertical at fence eight, and the last two fences which consisted of a massive 1.75m-wide oxer followed by a water-tray vertical took their toll.

The real excitement kicked off when Williams set the jump-off target with a fabulous round from the bold and brave 15-year-old Titus who stopped the clock in 37.74 seconds. This pair’s relentless gallop from the penultimate oxer to the final fence had the crowd gasping with incredulity, but little did they know what was still to come.

Five horses later they were on the edges of their seats once again as Maher produced a fabulous flowing round from the 10-year-old mare Diva who tapped a few poles but left them all in place, and with a great turn to the penultimate red oxer galloped into the lead in 37.15 seconds.

Next to go, Brash took a pull before the last that may have cost valuable fractions of seconds to temporarily slot into runner-up spot when crossing the line with his nine-year-old mare Hello M’Lady in 37.49 seconds. And when Dutch contender Jur Vrieling’s brilliant grey, VDL Zirocco Blue, threw in a stop at the double, now four fences from home, and German ace Marcus Ehning’s stallion Comme Il Faut stood too far off the penultimate oxer for four faults, then Gaudiano was still chasing Maher’s leading time when next into the ring.

And the Italian showed exactly why he took the Leading Rider trophy last weekend in Geneva (SUI) where he enjoyed a great run of form. As always, throwing caution to the wind, he set off with complete determination and Admara answered his every call, showing precisely the same level of commitment as the man on board to race through the timers in 36.20 seconds and really put it up to the rest of them.

Try as they would, none could match their speed and accuracy, although, last to go, Michael Whitaker gave the home crowd one more moment of magic when quick enough to slot into third place. Whitaker said afterwards that he had “a terrible stride at the third and a terrible stride at the fourth which is why I didn’t win!” But for Gaudiano and his courageous gelding it was a day when everything fell into place.

Talking about his jump-off round, the Italian rider said the eight strides from the opening triple bar to the following oxer was very long for the short-striding Admara, and that while many of the others could cover the distance from the penultimate oxer to the last on seven strides, “I did eight but I still won!

“I knew I would have to go very fast if I was to win, but I have a fantastic horse who is very clever and careful, and I love him!” he said of the gelding which he has had since the horse was just two years old. “To win here is very nice for me. Italy has only one place in the World Cup series and I chose to come here because I really love this show,” he added.

“When Emanuele is clear it’s impossible to beat him,” said runner-up Ben Maher. “He’s known as a very fast rider, but next year he’s better off in Italy than here because he’s spoiled our party here today!” the British rider added with a grin. “It was difficult course in a tight ring and I couldn’t have done any more with my horse today; she did everything for me,” Maher added.

Today’s result has rocketed Gaudiano from 42nd spot on the Western European League leaderboard all the way up to 13th, and well within a shot of a place at the Longines FEI World Cup™ Jumping Final in Gothenburg, Sweden next March. So the Italian rider said today that he will hope to pick up some more points at the ninth leg of the series in Leipzig, Germany in January. There were some other significant moves on the leaderboard also, with Maher moving up from 51st place to 23rd while Michael Whitaker picked up his first points of the season to go into 33rd position.

There are four remaining legs of the Western European League, and the next will take place in Mechelen, Belgium on 30 December with Germany’s Christian Ahlmann still holding pole position ahead of French riders Simon Delestre and Penelope Leprevost.

The next leg will take place at Mechelen in Belgium on 30 December 2016. For details of the Belgian fixture, go to www.jumping-mechelen.com or contact Press Officer Edith de Reys, edith.dereys@skynet.be, +32 475 65 92 81.

The Grand Hall at Olympia in London (GBR) was the venue for the seventh leg of the Longines FEI World Cup™ Jumping 2015/2016 Western European League this afternoon.

15 of the top 30 riders in the Longines world rankings were in action.

The winning partnership was Italy’s Emanuele Gaudiano with the 10-year-old KWPN gelding Admara.

Today’s win has promoted the Italian rider to 13th place on the Western European League leaderboard which continues to be headed by Germany’s Christian Ahlmann.

The time-allowed in the first round was 69 seconds and Britain’s Robert Whitaker was unlucky to miss out on a place in the jump-off when picking up just a single first-round time fault with Catwalk lV.

17 clears in the first round.

4 British riders finished in the top five in today’s competition.

Emanuele Gaudiano ITA (1st): “London is a very nice show; if you have the opportunity to win or do well it’s great and there are a lot of classes to compete in.”

Ben Maher GBR (2nd): “Diva is a very feisty horse, and it felt like I was at Cheltenham coming to the last! She’s been fantastic for me this year, always comes forward for me when it matters, and that’s the sign of a great horse.”

Michael Whitaker GBR (3rd): “I’m very happy with my horse [Viking]; the jump-off wasn’t my best jump-off ever, but it just shows how good he is to be third.”

Bernardo Costa Cabral, Course Designer: “I’m very happy with the way they jumped. I was very confident because they’ve [the horse and riders] have been jumping well all week and were prepared for this World Cup.”

John Roche, FEI Jumping Director: “Congratulations to Olympia, Simon Brooks-Ward and his team for organising this outstanding event and a very special thank you to Longines and H&M (today’s sponsors) for their support.”

Michael Whitaker GBR (3rd), when asked how the sport has changed in recent years: “It’s getting faster, or I’m getting slower – the whole sport has improved!”

Ben Maher GBR (2nd): “The surface is great, the horses jump well in this environment, riders have the best crowd in the word behind them – everybody wants to win at Olympia!”