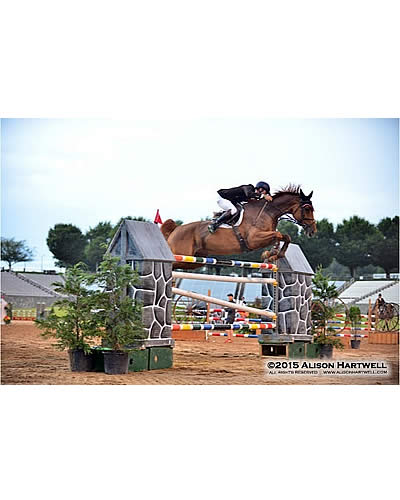 A field of fourteen horse and rider teams took to the series of six jumps which began at a height of 1.20 meters (3’11”). After two rounds the six fences were reduced to a series of four fences and after four rounds, were raised to a final fence height of 1.70 meters (5’7″). Only seven horses advanced to the final stage.

Michael Kocher of Tryon, North Carolina was next to challenge the four jumps in the irons of Judith Habeeb’s Secretive. However, a rail at the third fence with four jump faults had him tying with Osborne and Hartigan.

Lizzie Van Der Walde from Ann Arbor, Michigan and Anne Gardner’s Zippo Ii were next to go. However, after a rail at the third fence and refusal at the fourth, they elected to retire.

Richard Matthews of Odessa, Florida and Sheetal Patel’s No Doubt Vt followed Van Der Walde, but had rails at fence three and four.

Aaron Vale of Morriston, Florida in the irons of Donald Stewart’s Okla Homa were next to go and the first to go clean to the delight of the crowd!

Miguel Ventura of Murfreesboro, Tennessee and Allison Ventura’s Helen were the last to go in the class and also turned in a clean round! The packed VIP tent and arena walls lined with spectators erupted with cheers!

“The Six Bar Class was very exciting and a competition that everyone can understand. The crowd was really on the edge of their seats. For many, it was the first time they have seen such a class,” commented Bell. “It was especially great to have our sponsors Regions Private Wealth Management with us to experience this well-loved, exciting event,” he added.

“To run this event in conjunction with the Annual Outback Steakhouse Dinner to benefit the Hope Clinic is fantastic. This is such a great charity and we are thrilled that we can partner with them in their fundraising efforts. Giving back is what true horse people do and I feel that our clientele embodies this sentiment.” Bell believes that philanthropic efforts not only give to worthy organizations, but also give back to the individuals participating in them ‘ten-fold.’ “It feels good to give back to the community,” he said.

The Hope Clinic provides affordable alternatives to the hospital emergency room for the primary care/ internal medicine medical needs of the uninsured in Gwinnett County, Georgia. The Hope Clinic was founded on March 29, 2002 by Dr. William Martin. After 30 years of practicing internal medicine in Gwinnett County, Dr. William Martin was seeing a trend he couldn’t ignore – an ever-growing number of needy patients falling through the cracks of the medical system.

The Hope Clinic’s mission is to provide the very highest quality of medical care to those with limited or no access to healthcare and to treat each patient with the utmost respect and kindness without regard to language, national origin, or ability to pay.

A total of 3,159 patients were served in 2014. Total visits provided by the Hope Clinic in 2014 were 7,538. 56% of all patients are female with 46% of Hope’s patients being Female Head of Household. 17.3% of the Hope Clinic’s female patients are totally dependent on others for food, shelter and clothing and considered indigent. Services include Chronic Care Management for those suffering multiple diagnosis, mental health care, well-women care and acute care. The Hope Clinic’s goal is to provide a medical home to those who need it the most.

The Outback Steakhouse Charity dinner raises approximately $30,000 each year towards the Hope Clinic’s mission to provide services to the uninsured and indigent of Metro Atlanta through sponsorships and ticket sales.

VIP opens at 6:30 pm. Tables of 8 are $450 per week and a cash bar is available each week. Be sure to see the office and purchase your table now for the best views, meals and events at the Atlanta Summer Classic. For those on the run, feel free to call Grace at 843.786.5503 to reserve your table.