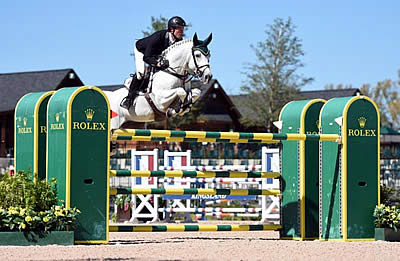 Mill Spring, NC – March 25, 2016 – In a continued effort to increase competition opportunities for equestrian enthusiasts around the world, Tryon International Equestrian Center (TIEC) is eager to bring international competition to the facility for the 2016 Tryon Summer Series, hosting four consecutive weeks of FEI competition, including three CSI 3* weeks and a CSI 4* competition. The Tryon Summer Series will begin on Wednesday, June 29, and conclude Sunday, July 24.

Following the inaugural campaign of FEI competition at TIEC in 2015, the facility will showcase the finest of equestrian sport in the foothills region of western North Carolina with the Tryon Summer Series, featuring four successive “Saturday Night Lights” FEI Grand Prix events for both riders and spectators.

The 2016 Tryon Summer Series will begin with Tryon Summer 1 on Wednesday, June 29, following the conclusion of the eight week Tryon Spring Series, which will host three weeks of FEI competition, including FEI CSI 3* and FEI CSI 5* competition. Tryon Summer 1 will commence with a FEI CSI 3* competition to kick off the four week summer series, offering a $34,000 1.45m class, $34,000 1.50m class, and a $127,000 Grand Prix CSI 3*. The inaugural Great Charity Challenge of the Carolinas will take place on Friday, July 1, under the lights in the George Morris Arena.

The Great Charity Challenge of the Carolinas will highlight more than 20 equestrian relay teams, composed of amateur and professional riders, supported by corporate sponsors, competing to raise funds and awareness for approved local charities in the western Carolina community and region.

The general public is encouraged to join the festivities and cheer on their favorite equestrian relay teams, who will be dressed in accordance with this year’s overarching theme of superheroes. For more information and inquiries regarding participation and sponsorship for the Great Charity Challenge of the Carolinas, please contact GCC@tryon.com or fill out an inquiry form here.

The Tryon International Equestrian Center (TIEC) is destined to become one of the premier equestrian destinations in the world. The facility opened in June 2014 with initial supporting amenities including 10 riding arenas, 850 permanent stalls, a covered riding arena and fitness center. Future expansion includes a sports complex, condominiums, two hotels, sporting clay course, vendor and retail village, as well as an 18-hole golf course plus a full calendar of national and internationally recognized competitions, featuring numerous disciplines of equestrian sport. It is a spring, summer and fall haven for equestrian competitors and enthusiasts. For more information, call 828-863-1000 or visit www.tryon.com.