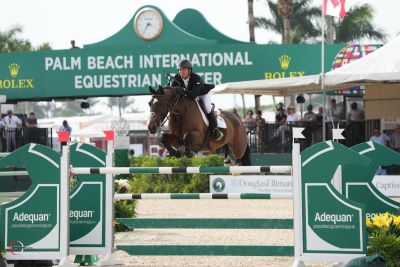 Wellington, FL – March 10, 2022 – The $75,000 Adequan® WEF Challenge Cup Round IX CSI5* was the main event in the International Arena on Thursday, March 10, at the Winter Equestrian Festival (WEF). U.S. Olympic team silver medalist Kent Farrington put forth the winning jump-off round on Orafina.

A total of 52 elite international competitors representing 16 nations contested Alan Wade’s (IRL) first round. Wade designed a difficult track and by the class’s halfway mark only five entries were set to return for the jump-off. The course, which included both a double and a triple combination, kept 15 riders from jump-off contention with the fault of a single fence but also tripped up an additional five competitors with the tight time allotted of 73 seconds.

As the final fences were set for the shortened course, 10 combinations had qualified to return but only nine found their way back to the arena as Shane Sweetnam (IRL) and James Kann Cruz elected to save their jumps. Always one to watch out for in a jump-off class, Farrington was the first to qualify for the class and therefore the first to return with Kent Farrington LLC’s 10-year-old KWPN mare (For Fashion x Canturo). As he has done many times before, Farrington made it look easy as the pair cleared the final timers fault-free with a fast time of 33.41 seconds.

Belgium’s Jos Verlooy and Eurhorse BVBA’s Luciano Van Het Geinsteinde once again pinned in the top three for the class as they rounded out the victory gallop with a final time of 34.28 seconds. Verlooy and the 11-year-old BWP gelding (Quinn Van De Heffinck x Air Jordan) have been in top form and were the winning combination in this class during WEF 8.

The International Arena was buzzing with 73 entries for the $37,000 Corro 1.45m Grand Prix Qualifier CSI2*. Carly Anthony (USA) and Jet Blue led the way from start to finish to don the winning cooler and ribbon sash.

Anthony was the pathfinder with Jet Blue and was first to produce a clear effort across the track set by Alan Wade (IRL). Competitors were ready for the challenge with 21 pairs advancing to the jump-off. Three riders withdrew, leaving 18 to tackle the short course. Anthony and Jet Blue continued to set the standard, crossing the timers in 34.17 seconds.

Jet Blue is owned by Robin Parsky’s Portfolio Horses LLC and was previously ridden by McLain Ward (USA). Anthony took over the ride on the 11-year-old KWPN gelding by VDL Zirocco Blue about two years ago. Since then, the two have built up a strong partnership, including Anthony’s first nations cup appearance in the CSIO3* Nations Cup at the Vejer de la Frontera show in Vilamoura, Spain.

During WEF 7, Anthony and Jet Blue posted a clear first round in the $37,000 Palm Beach Equine Clinic 1.45m Grand Prix Qualifier, but they suffered rails down in the jump-off. This class was a different story.